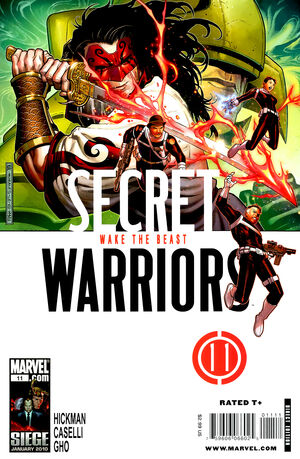 Appearing in "Wake the Beast"Edit

Synopsis for "Wake the Beast"Edit

Nick Fury comes into Daisy Johnson's quarters, telling her that they have a trip to make.

Meanwhile, at Agarashima, stronghold of Clan Yashida, the Silver Samurai is attacked by mysterious, demonic warriors. After a small struggle, he is subdued. The black warrior plunges it claws into his face, before determining that he does not have what they're looking for. The largest grabs the Samurai, demanding to know where "the box" is.

At Nemesis shipyards, Viper and Gorgon are surveying the completion of Hydra's new dreadnought Medusa. As their servants cater to them, Gorgon remarks how impressive things are. Viper points out that he wanted a war. He responds that she does not and ask what she desires; Viper answers that she wants more for her destiny.

Gorgon asks one of his female servants to accompany him. But when they reach his quarters, he takes off his shades and uses his petrifying eyes to turn her to stone, as he did with other girls. He then looks at his blade.

Flashing to six years go, Gorgon, while playing the piano, receives a visit from Commander Kraken. Gorgon becomes impressed by Kraken's personality and asks if he had met his family, whom are all turned to stone. He warns that he could do the same to Kraken; Kraken points out that he has a helmet on that would prevent that. His real purpose for meeting him is to give him the blade Godkiller, which is said to have killed kings, emperors and made a god bleed. Gorgon accepts it but asks why. Kraken simply answers that he is not to deny him his destiny.

In the present, San Juan, Puerto Rico, Stonewall is taking Yo-yo to meet with her mother. However, the latter is hesitant to meet her mother with prosthetic hands. Nonetheless, Stonewall forces her to do it. When she knocks on the front door, she reluctantly says hi to her mother.

At Nemesis, the same group of warriors who attacked the Silver Samurai descend and swarm the base. They then arrive at Gorgon's chambers, declaring themselves to be Leviathan.

At Hotspot, Fury Secret Base #13, Fury and Daisy have arrived to meet with his army to battle Hydra, H.A.M.M.E.R. and Leviathan. However, he tells her to throw the Druid off her team, as he is a liability, to which she tries disagreeing. In the adjourning room, Fury introduces her to Alexander Pierce and Mikel, Fury's son, leaders of Black and Gray teams respectively, as well as PSI-Agent Olivia Hooks and reintroducing Dum Dum. But first, Dum Dum issues for Hooks to scan Daisy's mind. Then, Fury orders both Hooks and Dum Dum to leave the room; when Daisy asks why he did that, Fury dodges the question. He then tells all three team leaders that from now own, their objectives will be intertwined, for now, they have to be ready for the coming storm.

Retrieved from "https://heykidscomics.fandom.com/wiki/Secret_Warriors_Vol_1_11?oldid=1452279"
Community content is available under CC-BY-SA unless otherwise noted.