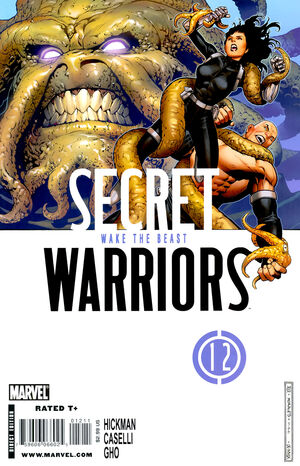 Yo-Yo, this piece of %#^@ is Crusher Creel...the Absorbing Man. My father.

Gorgon fights the warriors of Leviathan. He easily defeats the squad through use of his sword and petrification. He comments that they should have brought an army. The Leviathan squad leader says that that day will come. He then starts charging, only to be knocked back. Trying to get back up, the squad leader says that there are plans within plans and his masters are waking from their long sleep. He uses his claws to puncture Gorgon's face, intending to find information for his masters. Gorgon quickly reacts by slicing off his arm before using Godkiller to pin him. He then demands to know what they're after. The squad leader reveals that they have Viper. Killing the Leviathan soldier, Gorgon rushes through Nemesis, only for Leviathan to escape -- with Viper in tow.

Meanwhile, in southern Florida, Stonewall is teaching Slingshot how to drive. However, the latter convinces him to see his father at the Lacoochee supermax prison. However, Slingshot begins to regret convincing him when he tells her that before he was born and before his father got his powers, he raped his mother after he jumped parole. Some time after he was born, his father broke out and paid him and his mother a visit. They fought, at which upon physical contact, Stonewall gained his powers as well. Then, his father comes up to the booth, revealed to be Crusher Creel, aka the Absorbing Man.

Flashing to six years ago, Baron von Strucker's aide de camp, Ms. Fisher, welcomes a meek recruit to Hydra. The recruit is transported to their underwater lair, where he is stripped naked in the middle of a chamber filled with strange pods. Observing is Strucker and Kraken. The former questions why they admitted the newbie. Kraken elaborates that that recruit has deficient white blood cells and low IQ, the perfect qualifications for bonding with the parasites they have engineering. They observe the creatures bursting out of their pods and attaching themselves to the recruit, creating the monstrosity that is the Hive. Kraken expects that the recruit would have adapted to parasites in years.

In the present, the ruling council of Hydra discusses Leviathan's attack on Nemesis, which cost them two dreadnaughts and half of its personnel. Gorgon concludes that there is a traitor in this room. However, Madame Hydra asserts that the whole attack may have been staged. Nonetheless, Kraken informs everyone that the Psi-agents that had been retrieved from Red Worm have been repurposed to find the traitor.

Meanwhile, at Hotspot, Fury and his team leaders has their first and only meeting, to debrief on their enemies. He informs Daisy Johnson that his son Mikel has been researching Leviathan; Alexander Pierce is looking at Hydra; and Daisy's team is Fury's personal squad. As the debriefing starts, Pierce says that his team had been looking for Hydra's bases, though Fury hadn't authorized any moves on them. Mikel then states that his team had been hitting dead ends searching for Leviathan. However, Fury answers that a month ago, he had managed to extract the necessary information from Seth Waters.

Fury then elaborates on their enemies. For Hydra, they started out of remnants of Imperial Japan and fascist Germany, with their ideology changing, but not methodology. For Leviathan, it was formed by the Soviets, with over 100,000 agents. Then one day, all of its agents disappeared.

At Leviathan's cold storage facilities, The Long Winter, Leviathan brings in Viper for interrogation. The leader demands to know where "the box" is. When she refuses to comply, they plunged their claws into her face, before determining that she doesn't know; Madame Hydra has it. The Leviathan leader grumbles that this is a delay in their plans. He then declares "Summon the horde... wake the best." And before him is countless lines of container

Retrieved from "https://heykidscomics.fandom.com/wiki/Secret_Warriors_Vol_1_12?oldid=1452280"
Community content is available under CC-BY-SA unless otherwise noted.