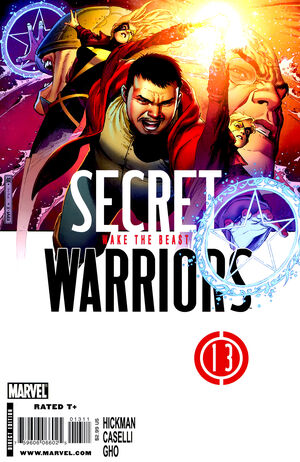 There's no getting around the fact that it's going to cause an international incident.

While in his jet of New York, Nick Fury talks with Dum Dum Dugan over video, to discuss tranferring Alexander Pierce's team to the Howling Commandos as backup on an operation to China. Right in Hotspot, where Dum Dum is, Gabriel Jones, Jasper Sitwell and Eric Koenig trust Fury's plan, despite the fact that it may cause an international incident.

Back on the jet, Daisy approaches Fury, telling him that she decides what happens on her team, even with the issue of kicking the Druid off it. Fury agrees with her but remind her that she needs to rethink everything before coming to a decision.

Meanwhile, in Gehenna, Gorgon catches Madame Hydra getting ready to search for Viper, despite not being cleared psychically. Madame Hydra argues that Kraken is wasting his time searching for a possible traitor while Leviathan may be extracting all their secrets from Viper.

Down in the Great Temple, Baron von Strucker demonstrates his skills and endurance against four of his best warriors. He manages to best them easily and killed the one who stabbed him in the back. Kraken, who was observing, applauds him. He then cuts to the issue of discovering the traitor.

Flashing back to five years ago, on Hydra Island, Strucker is with his children, Andreas and Andrea. Andrea is bored with the peaceful island and wish for some excitement. Then suddenly, Kraken turns up. The Strucker twins reacts and join forces, only for their father to stop them, stating that Kraken is an old friend. The two heads of Hydra take a walk around the island, before standing before standing before a stone carving, reminding Strucker of Pieta, the day where he first arrived on the island, which points to some place. However, Kraken says that's not the reason he is here; he is dying. Strucker is baffled that mortality caught up with him but refuses to believe that. He swears that they will stand in Pieta over the bodies of Fury and Viktor Uvarov.

In the present, Fury and Daisy have returned to the Cocoon to gather the Secret Warriors. The latter debrief her team over things on a need-to-know basis. However, Fury is willing to let them back out of this; None of the team responds. Each member of the team is given specific instructions. However, the Druid is given a note saying that he's a liability and to go home.

Meanwhile, Madame Hydra's transport approaches Leviathan's base Long Winter. The Leviathan commander allows her to land. However, Leviathan wants something valuable in return: the box that Madame Hydra had procured from the Yashidas.

Retrieved from "https://heykidscomics.fandom.com/wiki/Secret_Warriors_Vol_1_13?oldid=1536208"
Community content is available under CC-BY-SA unless otherwise noted.