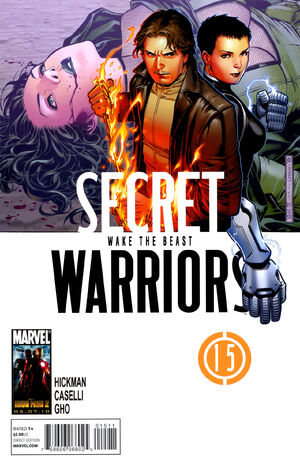 We were orphans. Little girls, all alone. Hydra gave us a home. Eight great houses. Twelve girls to a house. And in the end, the most determined... the most abmitious... the most aggressive... That girl would be the Viper. All it cost was everything. I have been married to a man I hated. I could not marry the man I loved. I betrayed him. And I was betrayed in turn. Then I was murdered. Death, welcome and well - deserved. But Hydra, it seems, will never be done with me... To live, and die and live again.

In Providence, Fury Secret Base #21, all of the Secret Warriors, minus Druid, are playing cards; Phobos wins one round. When both he and Hellfire makes unhappy comments towards Quake for dismissing Druid, she admits that Fury didn't think he was good enough. However, Stonewall is completely opposed to this, commenting about how seeing his father reminding him of how damaged and alone he's been. But because of Fury, they all have a purpose and they should be working as a family. Everyone but Phobos votes for bringing Druid back. Phobos explains that he's a pragmatist and Fury wouldn't care. Nonetheless, Quake decides to do it anyway.

Meanwhile, Hydra arrives at the Leviathan base Long Winter, only to find it deserted, except for a few squads left behind and the corpse of Viper. One Hydra agent brings to Baron von Strucker a holographic recorder, which projects and image of Orion, whom Strucker recognizes as Viktor Uvarov. When the device recognizes his voiceprint, Orion's message plays that despite the unfortunate mishaps between their two organizations during his sleep, they should meet at the Crown in three days.

The Hive looms over Viper. Momentarily, a flashback shows how Viper was among twelve girls taken in by Hydra and raised by Commander Kraken. Within twenty-two years, she had excelled beyond all the rest. The Hive then resuscitates Viper, causing her to be reborn as Madame Hydra once more, with a bulbous octopus-like thing on her head.

At Tamaya Resort in New Mexico, Contessa Valentina Allegra de Fontaine has waited for a long time before Fury turns up, with a bouquet of flowers. However, he isn't here to play games. De Fontaine asks if he already knows about her "extracurricular activities"; Fury admits that he's romantic. De Fontaine then signals her men, who were occupying her half of the restaurant to bring up their guns. However, Fury has men on his side too. He admits that when he was younger, he would've had her killed but as he got older, he began to wonder if she had been a liar or he taught her to. He then asks her about that things she told him that last thing there were here. De Fontaine confesses that they are both more concerned about ideology and "...you simply are what you are." Fury then declares that they are done, but promises that when they meet again, he wants her to remember that he brought her dame flowers.

When Fury arrives at Providence, Quake approaches him to ask that he reconsider about his decision about Druid but he gives her a flat no. He tells her that she needs to wake up and grow up for what he's preparing her for before walking away.

Quake strides into the kitchen, where Phobos, Hellfire and Eden are have a bet about the number of marshmallows. Quake pushes Hellfire right against the fridge before kissing him.

Retrieved from "https://heykidscomics.fandom.com/wiki/Secret_Warriors_Vol_1_15?oldid=1514113"
Community content is available under CC-BY-SA unless otherwise noted.