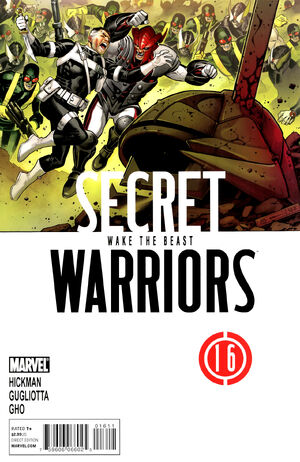 At Pieta, Fury Secret Base #7, Nick Fury is conferencing with the three teamleaders of his Catepillar teams about something extremely important...

Ten days ago, the Leviathan delegation has arrived at the Hydra base called the Crown in Kyoto. Kraken tells Baron von Strucker that there are three arriving. Among them is Magadan (Vasili Dassaiev), Orion (Viktor Uvarov) and obviously their traitor. The Baron can only reminisce on the old days.

Flashing back to two years ago, a young man has finally found a sickly old man in a hospital. He shows the latter a few books he found at his home in London, with the word, "Kraken" scribed on it. The old man becomes agitated, yelling that those books are for himself. The younger man sees nothing but empty threats. He comments that while he was reading through the books, he was amazed at his methods as the Kraken. He then puts on the Kraken's helmet, taking on the guise immediately, before killing the sickly man.

In the present, Orion, Magadan and Contessa Valentina Allegra de Fontaine have arrived to meet with the leaders of Hydra. The Contessa is more shocked to see Viper/Madame Hydra alive, with tentacles on her head. As the meetings begins, Orion gives out an offer of subservience from Hydra. Strucker refuses to and orders Gorgon to kill him. However, Orion survives a stab to the shoulder as Magadan whacks him away with his hammer. It is then that a Leviathan squadron attacks.

In the present, Fury ends the explanation with the fact that Hydra and Leviathan went to war. Unfortunately, there is no cause for celebration yet, as the leaders of both sides escaped the destruction of the Crown. Fury then proclaims that it is time for them to get on the offensive, for they are Operation:Go, to hit their enemies while they're licking their wounds.

As Quake takes off her telepresence helmet, she then gets into a romantic moment with Hellfire.

Back in Pieta, Fury is in conference with Dum Dum Dugan, James Garrett and a Professor and asks if either of them wishes to back out. However, all three are in agreement to see this through.

Sometime later, Hellfire receives a simple text on his cell, reading, "Meet now." He makes his way to the Black Atlas Bar to meet with none other than Baron von Strucker, revealing that he's in cahoots with his boss' archenemy.

Retrieved from "https://heykidscomics.fandom.com/wiki/Secret_Warriors_Vol_1_16?oldid=1452284"
Community content is available under CC-BY-SA unless otherwise noted.