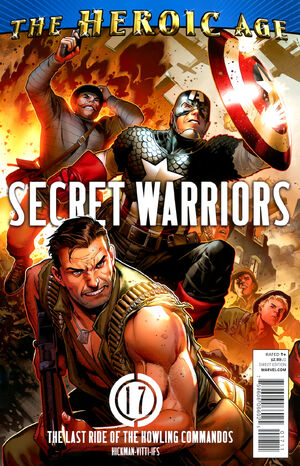 I believe in an idea... An idea that a single individual who has a right heart and the right mind... That is consumed with a single purpose... That one man can win a war.

Appearing in "The Last Ride of the Howling Commandos"Edit

Synopsis for "The Last Ride of the Howling Commandos"Edit

At a bar, Nick Fury is taking a drink, with a grim look on his face.

Meanwhile, at the United Nations, five permanent members of the U.N. Security Council are having an off-the-books meeting with Dum Dum Dugan and Jasper Sitwell, who are explaining the services of the Howling Commandos PMC. The representative of China simply interprets their band as a bunch of "hired guns". He asks Sitwell about what contracts the Commandos have taken one, such as with any nation, corporation or individuals. For the last question, everyone in the room knows that the Commandos are working for Fury, though Sitwell is in no position to confirm it. The Commandos then explain that about a week-and-a-half ago, there was a "get-together" or a party as Dum Dum puts it. It was the gathering of the old Howling Commandos, who celebrated with a toast. Captain Steve Rogers and Sharon Carter also arrive to join party. They then reminisce about Rogers' speech to the original Commandos before D-Day, about how one man can win a war.

The representative of the U.S. then asks about what recently happened in China, for everyone knows that there's a Hydra base -- Hell's Heaven -- located there.

A flashback shows Caterpillar Team Black taking down the Hydra base, along with HC backup.

The UN produces satellite photos detailing the Commandos' stolen Helicarriers located in the same area. The U.K. Representative demands to them if they are so righteous enough to think that they are more important than their government. Dum Dum answers yes. China then takes it that they invaded sovereign territory. Dum Dum simply answers that they took out a terrorist base that China knew about, just as much as Russia knows about the Leviathan bases activate along the borders of his country. Therefore, the Commandos are the only ones who are willing to stand up and deal with these threats, the way sovereign nations are afraid to do. The UN then asks if this was an isolated incident or are the Commandos going to continue with their current course of action. Dum Dum stand up, admitting that most of their men are dead. The last page of the comic depicts the smoldering wreckage of the Helicarriers.

Retrieved from "https://heykidscomics.fandom.com/wiki/Secret_Warriors_Vol_1_17?oldid=1452285"
Community content is available under CC-BY-SA unless otherwise noted.