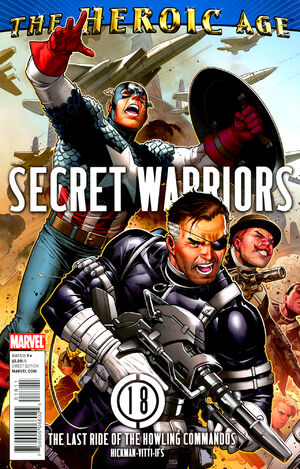 Appearing in "The Last Ride of the Howling Commandos, Part 2"Edit

Synopsis for "The Last Ride of the Howling Commandos, Part 2"Edit

The UN Security Council asks Dum Dum and Jasper to repeat their last statement: the whole of the Howling Commandos PMC are dead. The two remind the council that the reason why their intel is limited is because China is withholding info and the remains of their Helicarriers.

They continue with the debriefing. Team Black, led by Alexander Pierce, stormed Hell's Heaven, where the Hive parasites were being grown. They set a bomb and destroyed the Hydra base.

In parallel to their report, they also relate over the last meeting of the Howling Commandos and the good times back in the day of WWII. They then make a toast to Steve Rogers. As soon as Pierce's team departs their company, the Helicarriers are ambushed by Hydra, led by Gorgon.

Retrieved from "https://heykidscomics.fandom.com/wiki/Secret_Warriors_Vol_1_18?oldid=1452286"
Community content is available under CC-BY-SA unless otherwise noted.