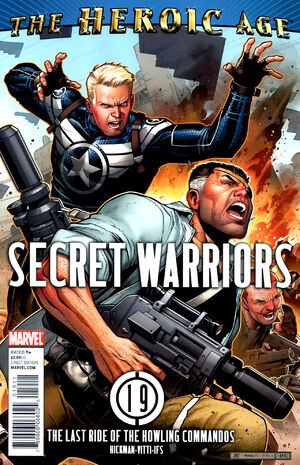 Are you in over your head, Nicholas?

Appearing in "The Last Ride of the Howling Commandos, Part 3"Edit

Synopsis for "The Last Ride of the Howling Commandos, Part 3"Edit

Two weeks ago, Gabe Jones gives some heartfelt words about remembering the fallen during the Howling Commandos reunion.

A week and a half ago, the Helicarriers are being ambushed by Hydra. Everyone abandons ship to fight Hydra on the ground. Both sides suffer heavy casualties. Jasper Sitwell is ordered to take Dum Dum away from the battle while Gabe and Eric hold the line. Unfortunately, Eric is shot in the head. Enraged, Gabe unloads all his fury against Hydra until he is decapitated by Gorgon.

In the present, the UN Security Council concludes all of these recent events leading up to Dum Dum and Jasper being found by the Chinese Army. But they still don't understand what they're trying to accomplish. Dum Dum then lists out all the points on the map displayed in front of him as Hydra and Leviathan bases. He explains that terrorists organization like these don't care anyone else or national borders and go unrestricted against the law. Only Nick Fury is trying to stop this but isn't willing to work with the UN. The meeting is then concluded.

The American UN councilor returns to her office to find Senator Robert Ralston having beaten her there first, looking for an update. She explains that Dum Dum and Jasper are being held under legal limbo in maximum security. Ralston advises her to continue questioning the Commandos and gleam in on their unique perspective.

Flashing back to the reunion at the time when the party has ended, Steve Rogers approaches Fury for a private talk. He asks Fury if he's in over his head. Though he doesn't know what his old friend is up to, he's not going to judge him. But he warns Fury that when this is all done, there's not going to be a happy ending for him.

In the present, Fury is staring at the pictures of his old friends.

Retrieved from "https://heykidscomics.fandom.com/wiki/Secret_Warriors_Vol_1_19?oldid=1656237"
Community content is available under CC-BY-SA unless otherwise noted.