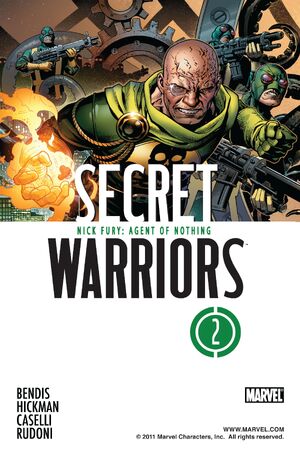 Oh, Nicholas. We've been dancing for years and for the first time you're hearing the music.

Appearing in "Nick Fury: Agent of Nothing, Part 2"Edit

Synopsis for "Nick Fury: Agent of Nothing, Part 2"Edit

Baron von Strucker is in his undersea headquarters Ichor, watching the Skrull battle Earth's heroes. He then asks the infiltrators in his base to show themselves. The Skrulls do so, planning on taking him out to take control of Hydra. However, Strucker defeats them easily with his Satan Claw. He demands to one of them as to how many infiltrators are in Ichor. The Skrull answers that they have endless numbers. Rather than rooting out all the Skrulls that had infiltrated his organization, Strucker destroyed Ichor killing humans and aliens alike. He escapes the base's destruction, planning on conquering the world rather than owning it. Strucker rebuilds Hydra, posting recruitment through colleges and stealing S.H.I.E.L.D. technologies. However, his aide de camp, Ms. Fischer informs him of Nick Fury's discovery of the Carousel base in Chicago. Strucker then comments that they both had been dancing for years and finally his nemesis hears the music. He then decides to call in an inner circle, comprised of Kraken, Madame Hydra, The Hive, and Viper. However, they are missing one person.

Meanwhile, Nick Fury is with Daisy, explaining the revelation of S.H.I.E.L.D. being Hydra, which makes everything he had done for decades to be a complete lie. He tells her that now, they are going to wake up and get even.

Daisy joins the rest of the Secret Warriors to dinner. Phobos then reveals that he can see the future and prophesies about each member: The Druid will become a great hero; Slingshot will get hurt but Stonewall will care for her; Daisy will do a great job soon and Hellfire will die.

When the Secret Warriors arrive back at the Cocoon, Fury briefs them on what's happened. The war they will fight will require no mistakes. He then says that one of them has to go undercover in Hydra.

Meanwhile, the new inner circle of Hydra attack The Hand at one of their temple, forcing the monks there to revive Gorgon. The grandmaster, however, demands Strucker's head, to which Strucker agrees. Unfortunately, the Hand finds out too late that Strucker had tricked them, as Gorgon's remains consumes them, turning them to dust.

Retrieved from "https://heykidscomics.fandom.com/wiki/Secret_Warriors_Vol_1_2?oldid=1452270"
Community content is available under CC-BY-SA unless otherwise noted.