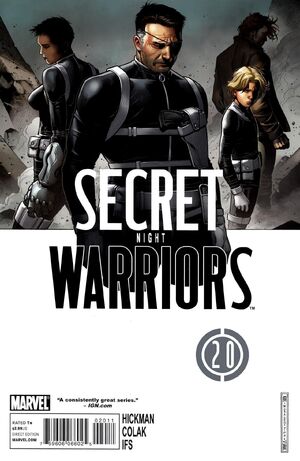 It is now all-out war between Hydra and Leviathan. Both terrorist organizations have gone extreme in their methods, taking out entire bases without regard for civilians. Eventually, the Leviathan thought to make a ceasefire, only for one of their leaders, Magadan, to get assassinated. In retaliation, Leviathan took out a Hydra recruitment center in Seattle. Nick Fury has had enough and declares that this all ends. While he's away making preparations, Hellfire tricks Quake into letting him out for a while so he could tell his Hydra contact about Fury's plan to attack the main Hydra base of Gehenna.

A few days later, the Secret Warriors are brought to orbital Heaven's Hell, a Fury secret base in orbit. There, Fury explains the plan for the main team to hit Hydra, while the other teams take on the last Leviathan bases. He had Eden make a portal into Gehenna, where they attempt to blow it up, but they were expected. And worse, once the bomb was armed, Eden was shot dead. Watching on screen, Baron von Strucker glees in his moment of destroying his nemesis.

Retrieved from "https://heykidscomics.fandom.com/wiki/Secret_Warriors_Vol_1_20?oldid=1488994"
Community content is available under CC-BY-SA unless otherwise noted.