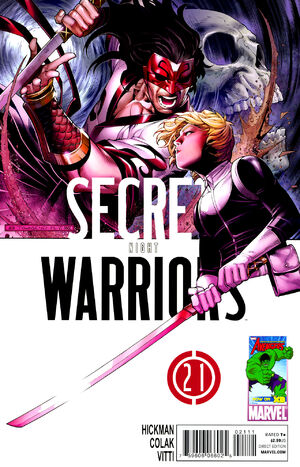 Baron von Strucker has Nick Fury and his Secret Warriors cornered and expects his nemesis to beg for the lives of his proteges. But Fury's respond is three bullets headed for Strucker's face, only for them to be sliced by Gorgon. With the timer on their bomb near the end of its countdown, the Secret Warriors are forced to flee. When the bomb goes off, Fury and Phobos are separated from the others by a chasm. Fury orders Phobos to get over to the others, but instead, Phobos knocks him across, as he goes against Hydra. He soon faces against Gorgon, as they draw their respective swords: Grasscutter and Godkiller. They dueled and determined that neither of their respective powers will work on the other, their blades break, before Gorgon throws Phobos to the ground. As he declares that this is the day he kills a god, Phobos whispers that this is how it's suppose to be, before being impaled.

Retrieved from "https://heykidscomics.fandom.com/wiki/Secret_Warriors_Vol_1_21?oldid=1452288"
Community content is available under CC-BY-SA unless otherwise noted.