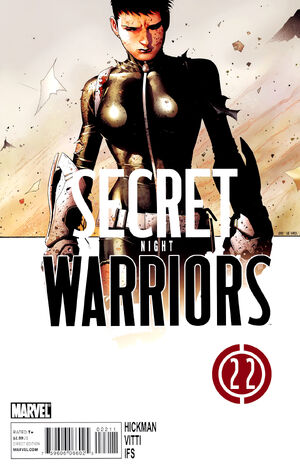 A Red Sword for a Red Lord... The fall of gods, and triumph for the Gorgon.

Shocked at the death of Phobos at the hands of Gorgon, Daisy brings down the entire cavern around them. While the Secret Warriors retreat, Gorgon advises Baron von Strucker to quickly abandon Gehenna. But Strucker refuses to leave, and thus, Gorgon and Viper decide to take their leave.

The Secret Warriors race to their evac transport, while Hellfire and Nick Fury held off the Hydra goons. But then, the Mountain Breaker bomb goes off, causing the floor beneath their feet to cave. Hellfire nearly falls in, only for Fury to grab him by the hand. However, Fury then states that he knows that it was Hellfire who betrayed them. He learned about his little venture from his own base, because no one leaves without him knowing, and followed him to his Hydra contact. Hellfire admits that Hydra tracked him down when he used some of their stolen money but he never meant for this to happen. Fury asks him why couldn't he come to him for help. Hellfire retorts that he just uses them, just like he discarded Druid. All what he cared about by Daisy. When asked by Fury if he loved her, Hellfire confessed that it was more than anything. However, Fury stated that if Daisy was holding his hand, things would be different -- and he's not Daisy and lets him go, taking revenge for the loss of Phobos. Fury then escapes to his transport, lying to Daisy that Hellfire didn't make it.

Sometime later, Strucker flies into a rage that Fury had nearly destroying Gehenna and that Gorgon and Viper too most of his forces with them. Kraken then enters, reporting that only one Leviathan base remains. However, he expresses disappointment in Strucker for failing to safeguard Gehenna and starts attacking him, declaring that he must be removed.

Meanwhile, Phobos is reunited with his father Ares in Elysium.

Retrieved from "https://heykidscomics.fandom.com/wiki/Secret_Warriors_Vol_1_22?oldid=1452289"
Community content is available under CC-BY-SA unless otherwise noted.