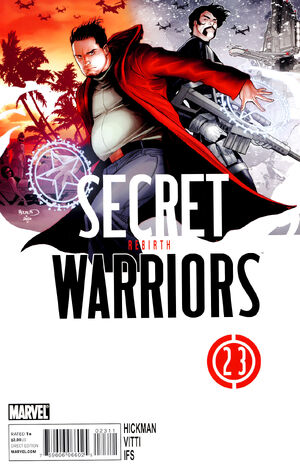 Druid has been expunged from the Secret Warriors by Nick Fury. But, when he returns home to Hawaii, he meets John Garrett, who has been sent by Fury to train him. After weeks, Druid becomes physically fit before accompanying Garrett on secret missions, which include erasing the remains of Helicarriers from the Howling Commandoes' last battle with Hydra, assassinating Magadan to put blame on Hydra and extracting the Secret Warriors from Gehenna. The aftermath of the mission results in the Caterpillar team being deactivated, as Eden is in a medically induced coma and Quake is distraught from Hellfire's betrayal.

Retrieved from "https://heykidscomics.fandom.com/wiki/Secret_Warriors_Vol_1_23?oldid=1452290"
Community content is available under CC-BY-SA unless otherwise noted.