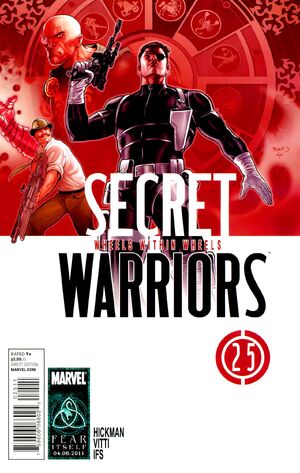 In 1961, Nick Fury, his brother Jake, Vasili Dassiev, John Garrett, Shoji Soma, Cornelius van Lunt, Baron Strucker, Dum Dum Dugan, Thomas Davidson, Daniel Whitehall and Viktor Uvarov are invited to a secret location called Pieta by a man codenamed Aries. After telling Jake that this meeting is top secret, therefore no notes, he tells all his guests that he's willing to give the keys for them to war their private spy wars, if they do a little contest to earn his favour.

Everyone is sent in groups on separate missions; in the pyramind of Giza, Egypt, they have to fight through Brood to claim their power source; the chapel at Chateau D'Amboise, France, they find some sort of android that lashes out with tentacles at Jake; in the Zargos Mountains, they find lines of containers.

Together, with the power source hooked up to the tubes, it is explained that they can augment new supersoldiers, as well as put them in stasis. However, Leviathan double-crosses everyone to take the technology for themselves. In the ensuring firefight, Fury's left eye is shot out. His comrades are able to help him escape.

A month later, Strucker allies with the Hand and interferes with Leviathan's plan to use the containers for their own army. Strucker personally impales Uvarov, forcing Dassiev to put his leader in the chamber. However, Soma removes the power source before the device could be used to saved Uvarov. Without the Brood power source, the machine feeds on itself and turns the Leviathan soldiers in stasis into monsters.

Fury confronts Aries, accusing him of unleashing two dangerous terrorist organizations upon the world. Aries smugly states that this was never a game.

In the present, Kraken has both Fury and Strucker at his mercy.

Retrieved from "https://heykidscomics.fandom.com/wiki/Secret_Warriors_Vol_1_25?oldid=1488995"
Community content is available under CC-BY-SA unless otherwise noted.