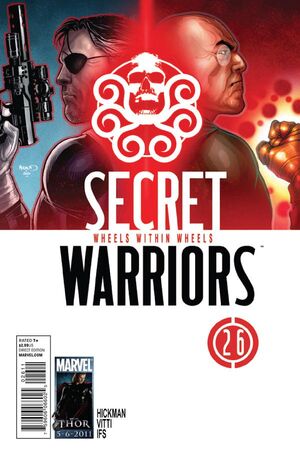 My God... I've been working for * you the entire time.

Kraken has both Nick Fury and Baron von Strucker bound in an unknown location. He leaves them alone so that they can make peace with each other before the end comes. Once they are all alone, they exchange words, including with Strucker taunting him with the fact that he was pulling the strings behind S.H.I.E.L.D. the whole time.

When Kraken reenters the room, Strucker as Kraken why did he betray him.

In a flashback to years ago, Lord Shigen and the Silver Samurai of Clan Yashida, and Hand Grandmaster Shoji Soma place the alien power source vital towards the revival of Leviathan inside. Despite Shigen's warning that no one who has opened the box has lived to see it closed, Soma knows that he is already dead.

Kraken confirms that Magadan later killed Soma the next day. Leviathan would continue to search for the box to safely revive their comrades, until Kraken alerted them to whom had the box, in order to bring a new piece on the chessboard to sow dissent within Hydra. This perplexes Strucker, confused as to why his old partner would aid Leviathan. However, Kraken reveals that that they weren't partners or even on the same side. As he releases Fury and gives him his signature S.H.I.E.L.D. uniform, Kraken reveals that it was he who called for Fury's Secret Warriors at the docks and used the Psi-Agents to spread subversion within Hydra. However, there were many things that he could not have anticipated, such as Strucker destroying Ichor, along with many of Kraken's agents; the Contessa Valentina de Fontaine, posing as Madame Hydra, to have been in league with Leviathan from the beginning; and that Gorgon, Kraken's greatest pupil, to have been written out of his own books. Strucker then realizes that the Kraken standing in front of him cannot be Daniel Whitehall. Kraken, revealed himself to be Jake Fury, admits that he pulled the plug on Whitehall years ago.

As Jake leaves the room once again, Strucker becomes even more confused, as Jake/Scorpio, took his own life. Fury admits to his nemesis that when they were involved in the Zodiac mission from 1961, he and Jake discovered a prototype Life-Model Decoy that copied Jake's appearance, effectively becoming the mentally unstable and eventually suicidal Scorpio. Fury then demands to know he did Strucker work his way into S.H.I.E.L.D. Strucker admits that he tracked down Thomas Davidson, who defected from S.H.I.E.L.D., to create a system to which he could control S.H.I.E.L.D. However, Fury's sly expression reveals that Strucker had in fact killed a LMD that was created the same day the Scorpio one was. Fury himself had set this all up so that he could have Strucker fooled. In short, Strucker was working for Fury the whole time.

Retrieved from "https://heykidscomics.fandom.com/wiki/Secret_Warriors_Vol_1_26?oldid=1498398"
Community content is available under CC-BY-SA unless otherwise noted.