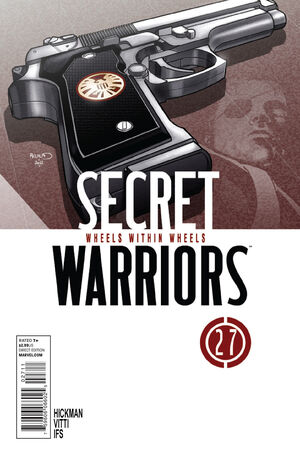 My son? My friends? Everyone I have ever sent into battle... All the horror? The death --his death... You didn't take anything, Strucker... This is my fault. The blood is on my hands. And I will sleep... when I am dead.

Baron Strucker is aghast that he was in fact working for Nick Fury, his arch-nemesis, the whole time, which Fury takes a glee to. Jake Fury then re-enters the room and puts on the Kraken helmet, informing his brother that everything has been set up with Senator Ralston and an awaiting aircraft for departure. He then passes a case containing a gun with the S.H.I.E.L.D. emblem on it and a single magazine. Turning to Strucker, Fury tells him that his son, Mikel, died with his team, taking down the last of the Hive bases. Strucker sneers that he can at least take pleasure that he took something from Fury and hopes that he will be haunted by that. Fury corrects him: everything that has happened is entirely his fault and the only sleep he will get is when he is dead. He then shoots Strucker in the head before he could say his last words.

At the newest Leviathan base, Perestroika, Orion and Contessa Valentina Allegra de la Fontaine plot to assault Gorgon and Madame Hydra. Then suddenly, all their Leviathan soldiers begin to self-destruct. They blame is hit on Fury.

Meanwhile, the UN Security Council is in session with Ralston, agreeing that they must provide relief efforts in response to the previous attacks committed by Hydra and Leviathan around the world. Already, the US President has agreed to fund the project. However, Ralston says that the President wants oversight on this project and suggested that he, Ralston, be the perfect man for the job.

In Berlin, the Contessa arrives at a federal agency to turn herself in.

Two days later, Jake finds Daisy in Hawaii, suntanning, and passes her an undisclosed message. When she goes to find Druid, it is already announced on the news of the President's new superfund with Ralston handling it. Shocked, Daisy tells Druid to pack his bags.

Retrieved from "https://heykidscomics.fandom.com/wiki/Secret_Warriors_Vol_1_27?oldid=1656203"
Community content is available under CC-BY-SA unless otherwise noted.