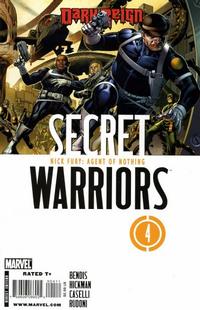 Appearing in "Nick Fury: Agent of Nothing, Part 4"Edit

Synopsis for "Nick Fury: Agent of Nothing, Part 4"Edit

Quake (Daisy Johnson) and The Druid (Sebastian Druid) are out in the desert in Australia searching for Eden Fesi a possible replacement for the injured Yo Yo whose arms were cut by Gorgon. Fesi was apparently asked to join Hydra already but he said no. Initially, he rejects Daisy's offer to, but when Gateway gives his permission, he goes.

Hellfire (J.T. Slade) is going through Nick Fury's stuff when Phobos (Alex Aaron) finds him. Instead of stoping him, he helps him. They both manage to find were Fury keeps his life model decoys.

Nick Fury goes to meet with Gabriel Jones and Dum Dum Dugan who can help him to prepare for some serious payback against Hydra. Dum Dum and Jones have open a private militia, Nick offers to contract them to take Hydra down.

Retrieved from "https://heykidscomics.fandom.com/wiki/Secret_Warriors_Vol_1_4?oldid=1452272"
Community content is available under CC-BY-SA unless otherwise noted.