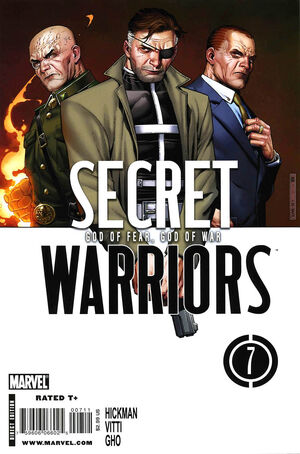 Appearing in "God of Fear, God of War: Part 1"Edit

Synopsis for "God of Fear, God of War: Part 1"Edit

At a bank in Zurich, Switzerland, Hellfire brings up a ransom note to the teller. Then, the rest of the Secret Warriors barge in. Unfortunately, Druid cut the blue wire, sounding the alarm. They break into the bank vault, taking all its contents. Nick Fury then gives a note to the bank president, specifically meant for Baron von Strucker, to inform his nemesis that he took 1.2 billion dollars belonging to him.

Meanwhile, Strucker knows of Fury's interference in stealing his funds. Because he's too occupied, he contacts Norman Osborn to kill his nemesis for him; the Director of H.A.M.M.E.R. would be delighted to. However, he brings up the issue of three missing Helicarriers and thousands of defective or dead H.A.M.M.E.R. soldiers from the Dock. He cites that Strucker hadn't achieved anything. Strucker concurred, pointing out who mentally ill he is. Osborn then informs Strucker that he killed his son; Strucker agrees that he owes him two favours. As they cease communications, Osborn trusts the task with Ares and the Thunderbolts.

Meanwhile at Fury Secret Base #22, Hellfire is dismay that he can't get any of the money, which Fury intended to give to Dum-Dum and the Howling Commandos PMC. However, he allowed them twenty dollars each. Then Phobos asks Fury about an unspecific issue.

Later, Hellfire and Phobos are on monitor duty. Then they intercept a message from Black Widow, requesting immediate extraction. The two smile at this and Phobos states that he's got a plan.

Two hours later, in Toronto, Canada, Fury meets with John Garrett to call him out of retirement. Then, he arrives in New York to meet with Black Widow and Songbird. However, he points out that they were followed. Just then, the door blows open, with the Thunderbolts on the doorstep.

Retrieved from "https://heykidscomics.fandom.com/wiki/Secret_Warriors_Vol_1_7?oldid=1452275"
Community content is available under CC-BY-SA unless otherwise noted.