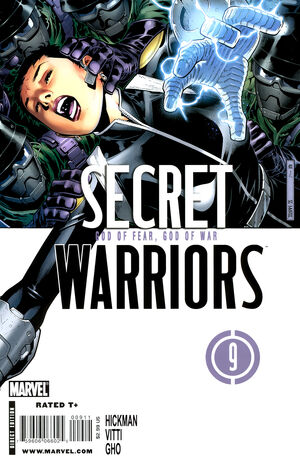 Appearing in "God Of Fear, God Of War, Part 3"Edit

Synopsis for "God Of Fear, God Of War, Part 3"Edit

Phobos, Hellfire and Eden are on the run for their lives, having accidentally lead H.A.M.M.E.R. to Inside Straight. Eden is able to using his abilities to generate portal for quick escape. However, Ares disrupts their transit, forcing them to run and accidentally allowing H.A.M.M.E.R. inside. Already, the base's self-destruct activates. In the infirmary, the Druid asks Quake to turn off the self-destruct. However, she tells him that only Nick Fury can do that and he ain't here. Slingshot quickly gets dressed and dashes off, quickly subdue the H.A.M.M.E.R. brigade quickly. Hawkeye attempts to shoot her with arrows only for them to caught in mid-air. The rest of the Secret Warriors join the fight, who activate the near limitless numbers of Fury Life Model Decoys. Stonewall moves in defense of Hellfire, almost about to be killed by Ares, having his axe embedded in his chest. Stonewall became metallic-skinned, enabling him to punch Ares.

Osborn takes pleasure and vaporizing the LMDs, but Quake shatters his helmet with her vibration powers. In response, he pushes her back. Stonewall catches her with his arm, only for Hawkeye to fire explosive arrows at his back. Slingshot brutally beats him up for underestimating her. Stonewall prevents her from continuing, as the countdown was almost up. Eden generates an escape portal, which the Warriors escape through. Ares, determined to retrieve his son, decides to stay, as he won't be killed, while Osborn flies out with an unconscious Hawkeye. Once the timer is finished, the base explodes.

At the White House, John Garrett, under alias of Jacob Coolidge, is set for his meeting with Seth Waters, subtly trying to determine his allegiance. However, Waters directly asks how he got into his office -- referring to his metallic body -- through two metal detectors. He outlines Garrett's history, revealing that he knows everything about him, from family, personal life and passcodes. He sends Garrett back to Fury with a warning that the people he works for are well connected and extremely powerful. They know what he's up to and are warning him to stop. As Garrett leaves and gets into Fury's car, confirming on a mission well done.

At Fury Secret Base #17, the Warriors recover. Eden presumes that Ares is dead, though Phobos downright knows that as a god, he survived and will come to an understanding one day with his own son.

Retrieved from "https://heykidscomics.fandom.com/wiki/Secret_Warriors_Vol_1_9?oldid=1452277"
Community content is available under CC-BY-SA unless otherwise noted.