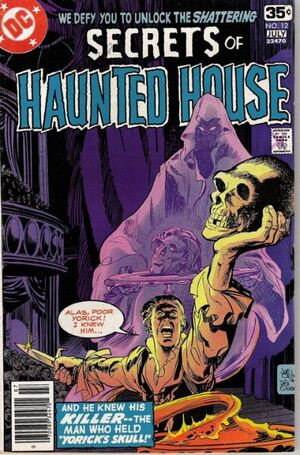 A drunken actor's understudy resents his bullying so when the understudy breaks Yorick's skull, he replaces it by cutting the actor's head off with an axe and boiling away the flesh. During the play, the skull doesn't hold still, rolling this way and that, ultimately causing the understudy to trip and decapitate himself on a prop. The last panel shows the two heads glaring at each other.

Retrieved from "https://heykidscomics.fandom.com/wiki/Secrets_of_Haunted_House_Vol_1_12?oldid=1457082"
Community content is available under CC-BY-SA unless otherwise noted.