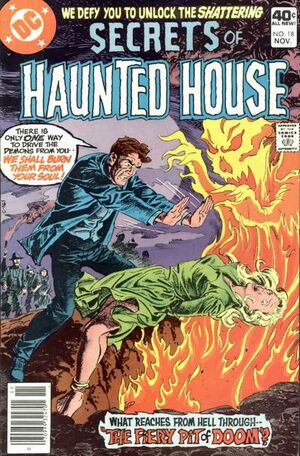 A man tires of his wife's devotion, so after several failed attempts to kill her, he decides suicide in his car is better than continuing to live with her and drives off a cliff. He survives the crash, but is paralyzed. The doctor reveals that his wife is waiting in the room to care for him always.

Appearing in "No Sleep for the Dying"Edit

Synopsis for "No Sleep for the Dying"Edit

Synopsis for "The Fiery Pit of Doom"Edit

Retrieved from "https://heykidscomics.fandom.com/wiki/Secrets_of_Haunted_House_Vol_1_18?oldid=1457088"
Community content is available under CC-BY-SA unless otherwise noted.