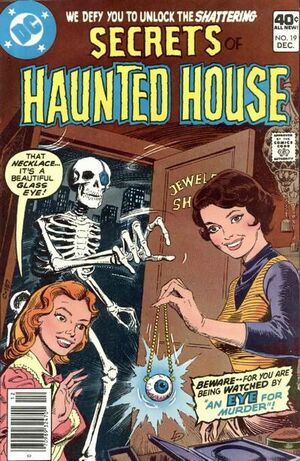 Appearing in "The Manner of Execution"Edit

Synopsis for "The Manner of Execution"Edit

During the French Terror, a rival for the executioner's wife informs her what her husband is doing for the state. She cannot bear this knowledge so she becomes one of his victims. He is incensed and attempts to murder the man who informed upon him but is sentenced to execution for the attempt. The corpse rises from the grave, chops off the man's head, and posts it upon a pike.

Appearing in "An Eye for Murder"Edit

Synopsis for "An Eye for Murder"Edit

Synopsis for "To Bug You to Death!"Edit

Retrieved from "https://heykidscomics.fandom.com/wiki/Secrets_of_Haunted_House_Vol_1_19?oldid=1457089"
Community content is available under CC-BY-SA unless otherwise noted.