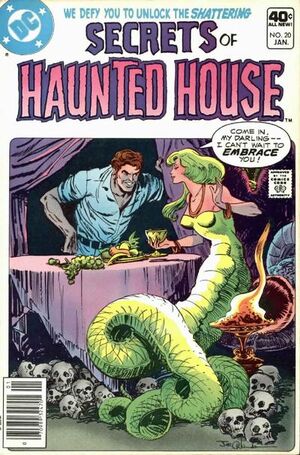 Appearing in "The Talisman of the Serpent"Edit

Synopsis for "The Talisman of the Serpent"Edit

A man brings a woman back from Africa who is suffering a curse which transforms her into a serpent to seek out human victims when the moon is full. She only agrees to become his bride because she possesses an amulet which wards off the curse, but one day she loses it. The man asks his best friend to slay his wife and child as he cannot bring himself to do it and then seeks his own death.

Appearing in "Heads You Lose!"Edit

Synopsis for "Heads You Lose!"Edit

Retrieved from "https://heykidscomics.fandom.com/wiki/Secrets_of_Haunted_House_Vol_1_20?oldid=1457091"
Community content is available under CC-BY-SA unless otherwise noted.