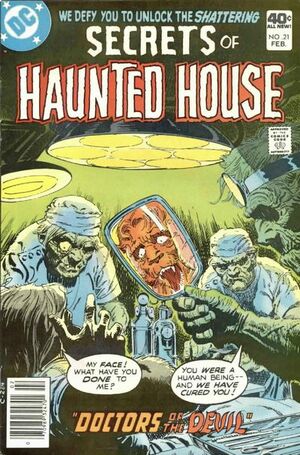 Appearing in "The Ghost of the Man Who Never Was"Edit

Synopsis for "The Ghost of the Man Who Never Was"Edit

A man encounters a glowing kid who claims he is a ghost. The boy tells him he fell down and died when he hit his head and is remorseful that he will never grow up until he encounters the man that he would have become and realizes he is evil.

Appearing in "The Death's Head Scorpion"Edit

Synopsis for "The Death's Head Scorpion"Edit

Synopsis for "Doctors of the Devil"Edit

Retrieved from "https://heykidscomics.fandom.com/wiki/Secrets_of_Haunted_House_Vol_1_21?oldid=1457093"
Community content is available under CC-BY-SA unless otherwise noted.