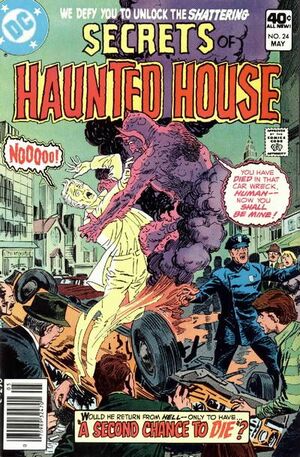 Appearing in "Second Chance to Die"Edit

Synopsis for "Second Chance to Die"Edit

A man killed in an auto accident is revived at the scene of the crash, but two souls now occupy his body. At sunset the evil soul possesses the body and kills a woman. The good man at first thinks of committing suicide in order to spare other people murderous attacks, but he doesn't have the nerve. He hits on a plan for trying to force the other soul out by driving on the cliffside at sunset. The other soul can't control the vehicle so the good man attempts to get the other soul to release its grip on the body so he can stop the car from going over the ledge, but the evil soul refuses, so the car goes over and both souls are released from the body by death once again.

Synopsis for "An Umbrella for All Seasons"Edit

Retrieved from "https://heykidscomics.fandom.com/wiki/Secrets_of_Haunted_House_Vol_1_24?oldid=1457099"
Community content is available under CC-BY-SA unless otherwise noted.