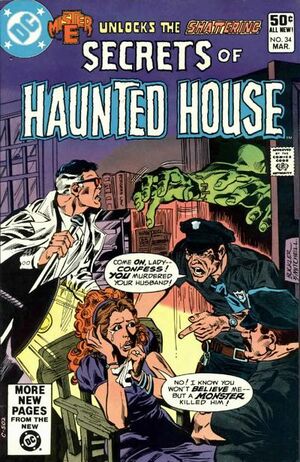 Appearing in "Double Your Pleasure"Edit

Synopsis for "Double Your Pleasure"Edit

Destiny appears in this story of two rival models to grant three wishes to one of them, but with the catch that whatever she wishes for, her rival gets double. Her first wish is to be America's top model, but then her rival becomes the international top model. She chooses a mansion for her second wish, thinking the rival will be stuck with a large tax burden from a house twice as big, but the girl sells it at a profit. Her third and last wish is for a six foot tall man who will love her forever believing her rival will get a twelve foot freak, but it turns out she gets two men. She wonders about the 'forever' part when her beau is revealed to be a vampire.

Appearing in "Haunt of Hate"Edit

Synopsis for "Haunt of Hate"Edit

Retrieved from "https://heykidscomics.fandom.com/wiki/Secrets_of_Haunted_House_Vol_1_34?oldid=1457119"
Community content is available under CC-BY-SA unless otherwise noted.