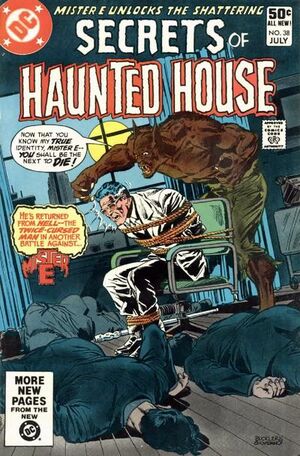 A jailed Indian dreams of a dark god escaping his reservation and causing havoc. His cellmates don't believe in any god and want the treasure that it's said to be protecting. They engineer their escape and return to the reservation. The Indian's grandfather leads him into a cave where waits the dark god's tomb. The Indian is so startled to see the place that he had dreamed of that he forgets his fear of the gun the other prisoner had and slams their heads together. His grandfather tells him to leave the two convicts to their fate and they flee the cave. When the unconscious men awake, they don't bother looking for the Indians but attempt to remove the seal on the tomb. They succeed, and are killed when the black god gushes forth...oil.

Appearing in "Slaves Of Satan"Edit

Synopsis for "Slaves Of Satan"Edit

Synopsis for "Conglomerate Of Evil!"Edit

Retrieved from "https://heykidscomics.fandom.com/wiki/Secrets_of_Haunted_House_Vol_1_38?oldid=1457129"
Community content is available under CC-BY-SA unless otherwise noted.