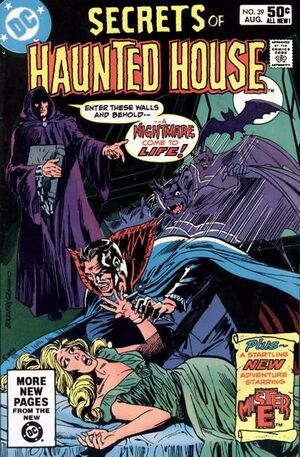 Appearing in "A Crutch in Time"Edit

Synopsis for "A Crutch in Time"Edit

A model who has been walking around with a crutch after being mugged comes across a vampire with amnesia that she invites back to her apartment because she's attracted to him. She reveals that she has a rival model whom the vampire takes to be her enemy. The vampire slays the rival and the model gets the job she wanted. She rushes back to her apartment to share the good news, but the vampire says that she owes her good fortune to him as he killed her rival. In panic, she stakes the monster with her crutch.

Synopsis for "A Touch of Silver"Edit

Retrieved from "https://heykidscomics.fandom.com/wiki/Secrets_of_Haunted_House_Vol_1_39?oldid=1457131"
Community content is available under CC-BY-SA unless otherwise noted.