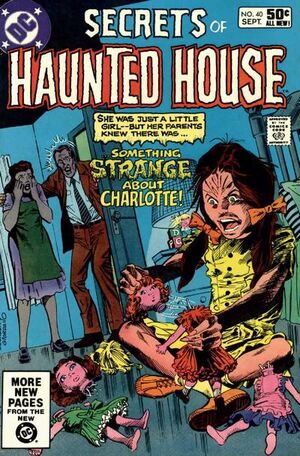 Appearing in "Something Strange about Charlotte"Edit

Synopsis for "Something Strange about Charlotte"Edit

A hag leaves her baby on a doorstep as she is too poor to support herself, the baby and her brother. Eventually she returns for the child, but the elderly woman doesn't want to give her up so she offers to let the other family stay in the house. They soon begin lording it over the man and woman who own the house and the man demands that they leave. The hag retaliates by threatening to tell the police that they had kidnapped her baby. The house owners back down and are made miserable by the wretches.

Synopsis for "The Crystal Crack'd"Edit

Retrieved from "https://heykidscomics.fandom.com/wiki/Secrets_of_Haunted_House_Vol_1_40?oldid=1457133"
Community content is available under CC-BY-SA unless otherwise noted.