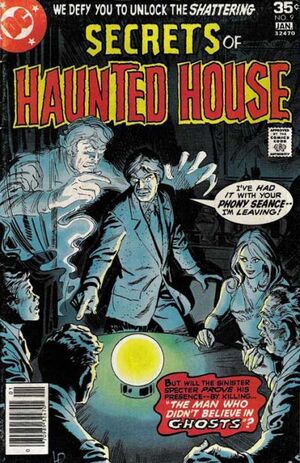 Appearing in "The Man Who Didn't Believe in Ghosts!"Edit

Synopsis for "The Man Who Didn't Believe in Ghosts!"Edit

The ghost of a suicide attempts to haunt the man that drove him to it, but the man has so little imagination that he is unaffected by wind gusts and chilled touches, so the ghost attempts to communicate to the man's wife who is more receptive to spiritual influences. The ghost succeeds, but is dismayed when, because of her husband's cruel assaults, the wife kills him and denies the ghost the satisfaction.

Appearing in "Maid to Order"Edit

Synopsis for "Maid to Order"Edit

Synopsis for "Dig Your Own Grave"Edit

Retrieved from "https://heykidscomics.fandom.com/wiki/Secrets_of_Haunted_House_Vol_1_9?oldid=1457079"
Community content is available under CC-BY-SA unless otherwise noted.