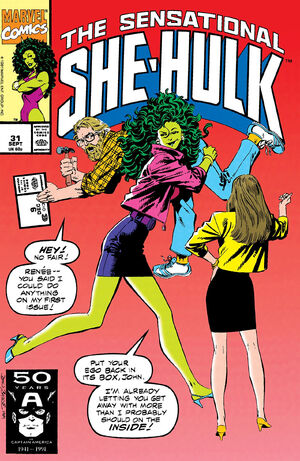 She-Hulk wakes up, shocked at her very weird dream. She sees what time it is, and rushes to get showered and dressed to pick up Weezi. Once she is ready, she hops in her car and flies over to Wheezi's apartment. Weezi gets in and they fly off to start their vacation.

Elsewhere, the private airplane of rock singer Milo Vinyl is caught in a storm. The pilot radios in for a course to follow, but the path leads right into a mountain! The pilot attempts to navigate around it, but the mountain keeps moving to stay in their path, and the plane crashes!

She-Hulk and Weezi are not far away when they hear a news report about the crash on their car radio. After hearing the report of a "moving mountain" Jen decides this is something they should look into.

They soon arrive at the crash site, and are surprised to see that it is perfectly flat; no sign of mountains anywhere. She-Hulk approaches the officer on the scene and says she is here to offer her help. The officer doubts that it is needed; he figures the pilot must have been drunk. However a man loaded with scientific equipment barges in and says that he warned them that this was going to happen. He says that his electro-flux variance plotter pinpointed this area as the next most likely target. Jen asks the man who he is, and he introduces himself as Professor Bob Robertson. He tells them that he has been tracking this phenomenon across the world for almost thirty years, and that he warned the authorities that this was going to happen here.

Weezi asks the police captain why he didn't listen to the warning. The captain didn't take the warning seriously due to the professor's claim that this is the work of Spragg, the Living Hill! The two women just look at Robertson like he's insane.

Robertson explains how he first encountered Spragg years ago in Transylvania. He was investigating a strange earthquake, but when he got there the villagers told him there was no quake and told him to leave. He discovered the village now had a new, hastily constructed wall, so late that night he decided to scale it and investigate. However, the wall was electrically charged. He tried flying over it with a plane, but crashed into a force field. So, he went under it, using an abandoned mine shaft.

When he got to the other side, he found the villagers working, late at night, constructing something around the base of a large hill. They all appeared to be in some kind of trance. They kept muttering about obeying the will of Spragg. Suddenly, the hill opened its eyes, and revealed that it was a living being… Spragg! Spragg recounted his origin story, telling how he started out as part of a cloud of harmless spores drifting through space until Earth's gravity well pulled them down into the blazing, molten core. There they developed intelligence, learned the art of telekinesis, and were able to generate earthquakes with their minds! Spragg was accidentally caught in one of those, and was thrust to the surface. Once there, he decided to use his mental powers to enslave all of upper Earth. However, he learned that he had been injured in the quake, and that his mental powers were now limited to electric hypnotism. He took control of the villagers, and had them construct a dynamo which he would use to extend his powers.

Robertson's metal mining helmet protected him from the hypnotic field, so he pretended to work on the dynamo platform, but actually made alterations to it, turning it into a huge rocket, that launched Spragg into space! Robertson hoped that would end the menace of Spragg.

Weezi interrupts his story to ask how a geologist was able to convert an electric generator into a rocket. She-Hulk says not to worry about it; he's a comic book scientist.

Robertson continues his story, telling how nearly 20 years later he found a familiar electric resonance in some seismic readings. The readings confirmed his fears that Spragg had returned! Jen points out that Spragg should have burnt up re-entering the atmosphere. Robertson says he thinks that is exactly what happened to Spragg's physical form, but that his electrical energy reached the surface and infused itself with the native rock. Robertson says that he has spent the last 20 years tracking manifestations of the Spragg force across the United States.

Jen asks if he has any proof to back up his theory. Robertson he has all the proof she needs. He sets up his counter frequency generator, which will generate an electric current the exact opposite of Spragg's frequency. This provokes a violent response from Spragg… a massive ridge of rock erupts from the ground and continues forming straight towards a nearby town, at 100 miles per hour! She-Hulk demands to know if Robertson has a back-up plan!

Soon, She-Hulk and Weezi are flying in the car to overtake the ridge. Once in position, She-Hulk jumps out, and lands on the crest of the ridge, where she plants one of Robertson's devices, which sets up a counter harmonic to shatter the rock. It works a little too well… the ridge collapses and a giant hole in the earth opens up, and She-Hulk falls into it!

Retrieved from "https://heykidscomics.fandom.com/wiki/Sensational_She-Hulk_Vol_1_31?oldid=1452354"
Community content is available under CC-BY-SA unless otherwise noted.