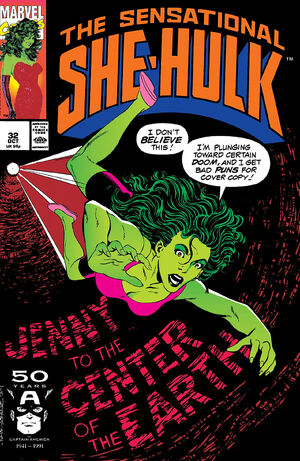 Appearing in "The Hills Have Eyes, And Mouths And Ears (And Maybe Noses...)"Edit

Synopsis for "The Hills Have Eyes, And Mouths And Ears (And Maybe Noses...)"Edit

Weezi is looking down into the giant hole and calling Jen's name. Professor Robertson tells her not to bother - his sensors say the hole is at least 50 miles deep! Weezi is afraid that She-Hulk can't survive a fall like that, but Robertson points out that she might not have fallen the full distance; he tells her that the walls of the bore have ledges and outcroppings that could have broken her fall. In order to go after her, and Spragg, Robertson brings out his Mecha-Mole, a large armored underground vehicle!

Meanwhile, She-Hulk is still falling. She wonders why she hasn't noticed an increase in pressure as she gets closer to the centre of the Earth. Then she notices that it is getting brighter and suddenly she plunges into water! Once she gets her bearings and resurfaces, she finds a jungle! It reminds her of the Savage Land, but that isn't underground, or in this area of the world. As she looks around, she discovers what appears to be a dinosaur! Reacting instinctively, She-Hulk knocks it out with a single punch. Then she gets a better look at it, and realizes that it isn't a dinosaur; it is just a big lizard with fake fins stuck on it. Then the Mole Man ambushes She-Hulk from behind! He zaps her with the electro blast from his staff before she can see who is there. Then he orders his Moloids to take her to the "chamber of transfiguration"!

Weezi and Professor Robertson drill their way underground inside the Mecha-Mole. As they go, Robertson recaps his origin story of Spragg, to remind Wheezi of what they are dealing with. Suddenly Robertson loses control of the vehicle. Spragg has telekinetically taken control! The vehicle punches through the rock wall, and suddenly they are falling into a cavern! Robertson deploys the wings, and manages to regain control. Wheezi is astonished that such tiny little wings are capable of holding up a two ton machine.

Spragg resumes his attacks by telekinetically bombarding them with rocks! Robertson uses evasive maneuvers, but then crashes into a pillar of rock that Spragg forms in their path!

The Mecha-Mole crashes, and although Wheezi and Robertson are unharmed, they need to evacuate since the fuel tanks are leaking. They go outside, and are surrounded by an army of Spragg's brethren!

Meanwhile, She-Hulk is hanging upside down above a vat of some unknown liquid. She-Hulk asks Mole Man if they can talk about this, but he believes that she has invaded his kingdom, and doesn't want to listen to her "lies". Jen explains that she only came down here to fight a bad guy who is probably a threat to him as well. She points out that she can't do anything to stop him while she is hanging above this glop.

Mole Man reveals that the "glop" is the residue from melting his magic diamonds. While examining the Valley of Diamonds, he discovered that they were supernatural in origin. When exposed to certain ultrasonic frequencies, the diamonds "sweat", and produced that liquid. He collected a huge vat of it, hoping to make a weapon of it. Then, one day, one of his subjects fell into the vat. They pulled her out, to find that a shell of the hardened fluid had formed around the woman, but when it was broken open, she had become a beautiful woman! Mole Man concluded that the fluid transforms someone into the exact opposite of what he or she had been. He threatens to immerse her in the fluid, and expects that a beautiful woman like her will be changed into something grotesque.

Having heard all she needed to, She-Hulk easily frees herself from her bonds, and swings over the vat. She then grabs a hold of Mole Man before he can escape, and snatches his staff away from him. She then tries to convince him to help her fight Spragg. As soon as he hears that Spragg is her enemy, he agrees to help… for a price! Jen says she doesn't have time to negotiate, and agrees to whatever he wants.

Suddenly, the ground starts to shake, and another ridge begins to jut out of the ground. Mole Man tries to make a run for it, but more rock formations appear to block his path. Spragg then emerges from the ground, and tells them that there is no escape!!

Retrieved from "https://heykidscomics.fandom.com/wiki/Sensational_She-Hulk_Vol_1_32?oldid=1452355"
Community content is available under CC-BY-SA unless otherwise noted.