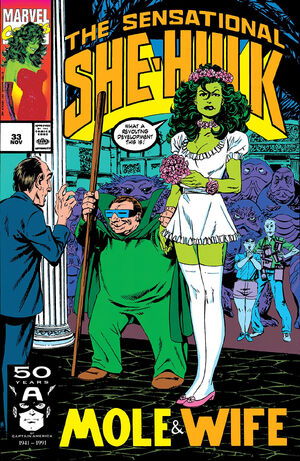 Appearing in "Mole and Wife"Edit

Synopsis for "Mole and Wife"Edit

She-Hulk punches Spragg in the face, shattering part of him, and causing him pain. However, he then reforms himself into a giant humanoid shape to battle She-Hulk more directly! Mole Man summons some of his own rock creatures to battle Spragg, but they are easily defeated. She-Hulk prepares to go back and face Spragg herself. Mole Man says she must be mad since Spragg will destroy her. The argument is rendered moot when Weezi and Professor Robertson arrive along with more of Spragg's people! At first Jen is worried that this is making matters worse, but Weezi assures her that these guys are on their side. Weezi explains that most of the Hill People are actually quiet and peaceful and that Spragg was always an outcast. When they learned about the problems Spragg was causing now, they volunteered to help. The other Hill People surround Spragg, trapping him by racing around him in circles. She-Hulk points out that just surrounding him won't stop him, since he can zap his living energy into another rock strata. Mole Man says he has already taken care of that. The area where they are is situated is over an acceleration point in Earth's geodynamic circulation. He is going to manipulate that to create a massive eruption that will blast the whole area, and all the Hill People, into space! Weezi says that he can't do that without giving the good rocks a chance to get to safety. Mole Man says he would gladly sacrifice thousands of the creatures if it meant disposing of Spragg! Moments later the eruption occurs, blasting Spragg and the Hill People into space! A bunch of Moloids carry Weezi away, and Mole Man says they are taking her to safety. She-Hulk is angry that Mole Man would do that to the Hill People who were trying to help him. Robertson reminds her that the Hill People were formed by spores from space, so they will probably be okay. Jen points out that evolutionary theory says that human's ancestors came from the sea, but that doesn't make humans any more capable of breathing under water. Mole Man says it doesn't matter… he helped her dispose of Spragg like he said he would, so now she has to honor her part of the bargain. She-Hulk asks what the price is. Mole Man smiles, "I wish only that you become my bride!"

Elsewhere, a young family is in their car, when suddenly they are approached by a group of zombies! The family screams as the undead march closer to their car!

Back underground, Jennifer has changed into the wedding gown. She is trying to figure out a way to get out of marrying the Mole Man, without breaking her word. Unfortunately, she can't think of any. One of her assigned bridesmaids is Gertrude, the woman who fell into the mystic goop and became beautiful. Gertrude tells Jen that she doesn't feel like she was changed into her opposite. She feels the way she has always felt, deep down inside. Seeing no other options, Jen goes to the wedding chapel. However, she is surprised that Weezi is no where to be seen. Mole Man stammers out an excuse that Weezi had urgent business on the surface and had to leave, but Jen isn't buying it. She screams in his face "WHERE'S WEEZI?!" Robertson calls out, saying he's found her. She-Hulk goes to investigate, dragging Mole Man along by his cape. She finds Weezi tied up, dangling over the vat of mystic fluid! Mole Man says it was insurance, to make sure she kept her word. She-Hulk tosses him aside, reminding him that the main ingredient of a successful marriage is trust! She goes to free Weezi, but Mole Man zaps her with his staff, ranting about how she has "betrayed" him, just like everyone else from the surface. Mole Man runs up and leaps into the vat… taking Weezi along with him. He doesn't know what manner of creature he'll turn into, but is sure that his opposite must be something huge and powerful. She-Hulk dives in after them to save Weezi! Robertson watches in horror, wondering what She-Hulk will be turned into. Moments later, Jen punches her way through the side of the vat and has not been affected! She is carrying the cocoon with Weezi inside. Jen explains that Mole Man's prejudices made him jump to the wrong conclusion about that the fluid does. It doesn't turn people into their opposites, it turns them into what they really are, deep down inside. That is why it didn't affect her, her gamma radiation had already released her inner most self. Jen smashes the cocoon, and we find that Weezi has been rejuvenated! They look around, but there is no sign of the Mole Man, and they don't find any crystal pieces which are large enough to hold a man. They assume that he must have had an escape route planned, rather than actually exposing himself to the glop. As they climb back to the surface, one of the small crystals cracks open, and a mole crawls out!

Two days later, Jen and Weezi are relaxing on a beach, and Weezi comments on how long it has been since she could wear a bathing suit and turn heads. Jen asks Weezi how old she figures she is now, and Weezi says she is probably early 40s. The two women lie down in the sun, and plan to enjoy their vacation.

Back in New York, a man in the shadows orders that She-Hulk be brought to him!

Retrieved from "https://heykidscomics.fandom.com/wiki/Sensational_She-Hulk_Vol_1_33?oldid=1452356"
Community content is available under CC-BY-SA unless otherwise noted.