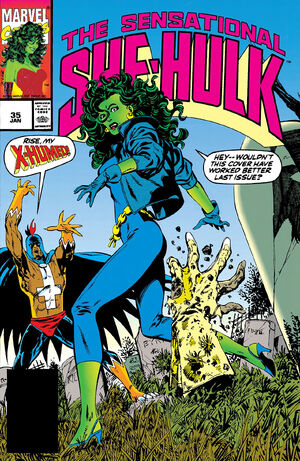 Appearing in "Hail, Hail, the Gang's All Dead"Edit

Synopsis for "Hail, Hail, the Gang's All Dead"Edit

She-Hulk confronts Black Talon and his Unliving X-Humed! She punches "Living" Diamond, but only manages to hurt her fist on his indestructible body. Black Talon then sends Black Bishop after her. His powers affect She-Hulk's gravity, causing her to feel like she weighs two tons! She-Hulk struggles against the power, and Weezi cheers her on. "Attagirl, Jennifer! Show 'em it takes more than these bozos have got to knock you down!"

That gives Jen an idea, and instead of fighting, she suddenly decides to just go with it and fall over. With the added gravity, she hits the ground like a ton of bricks, and the shockwave knocks all of the villains over, breaking Black Bishop's focus.

She-Hulk quickly gets back to her feet, and faces Scaleface, who transforms herself into a giant dragon-creature. The dragon swats Jen aside, but She-Hulk gets right back up and smashes a fist into the dragon's head! Unfortunately, the dragon-form is just as dead as Scaleface's human form, and it explodes from the force of the impact. Jen is disgusted to find her hand covered in dead dragon goop.

She charges out of the story to confront the Keeper Of The Comics Code, and demands to know how dragon goop is allowable. He looks it up, and informs her there are no specific rules against dead dragon goop.

The Keeper then pushes her back into the story, where the Changeling is reaching for Weezi. She-Hulk grabs him and tosses him at the rest of the X-Humed. Jen then frees Weezi from the post she was tied to.

Black Talon has taken advantage of this to make his escape; he and the X-Humed have gotten into his hearse and are driving away. However, he left Garth behind to distract She-Hulk! He grabs her into a giant, crushing bear-hug. Jen is unable to free herself since her arms are pinned! Weezi boxes Garth's ears, hurting him enough to make him drop Jen. She-Hulk tries to punch him, but he blocks her fist, and then hugs Jen in a gentle way. Weezi smiles and realizes that Garth has developed a crush on Jen! Jen isn't exactly thrilled with this development, but has other concerns at the moment.

Not too far away, a pair of cops are sitting in their squad car, monitoring traffic, when they see the hearse going driving by driven by a bunch of guys in masks. The cops assume it must just be for some jazz funeral...but then one of them spots Elvis in the car! The cop's partner thinks he is just seeing things, but the other cop is sure, and they give chase to get Elvis' autograph.

Jen and Weezi are flying in Jen's car, hoping to spot the hearse. Jen tells Weezi to check the police radio bands, hoping to find a clue. Weezi is happy to, since it gives her an excuse to stop reading the book on zombie lore, which is grossing her out. She turns on the radio, and they hear a report about a high speed pursuit of a hearse with Elvis Presley in it. The two women exchange a glance and then speed off to investigate the report!

They soon catch up with the hearse. Jen is driving with her headlights off, and then swoops in front of the hearse and suddenly turns her lights on! The sudden burst of light blinds Black Talon, and he loses control of the car, driving off the road and into a tree!

She-Hulk and Weezi land and run over the wreck. Black Talon wasn't wearing his seat belt, and crashed through the windshield. He is unconscious, but alive. She-Hulk notes that with Black Talon unconscious, the other zombies should be out of the fight, without him to direct them. She then questions Changeling, asking why he tipped off the cops with his Elvis impression. He explains that Black Talon couldn't control all of them at once, so he had to leave them some free will. Changeling had tried to redeem himself before he died, and he wasn't going to let Black Talon use his corpse to undo that. Jen realizes that when she stopped Changeling from reaching Weezi, he wasn't going to attack her; he was trying to free her. Jen promises to put all of them back in their graves where they belong. Weezi says that this is where things start to get icky. According to her reading, they have to fill the zombies' mouths with salt and then stitch their lips together to lay them back to rest.

Meanwhile, in Dimension Z, the scientist approaches the Supremacy and reports that it seems he has found a way to seize the human's secret of atomic power. The scientist lists their previous failed schemes to bring Earth scientists to their world to force them to build atomic bombs, and their failed attempts to steal existing nuclear devices, but the intra-dimensional transport neutralized the radioactive material.

However, the new scientist (the previous one was executed for his failures) has come up with a new plan… bring humans who have become irradiated! He has determined that the Hulk is too unstable for their plans, but he has discovered another option… the She-Hulk! The Supremacy is delighted with the holographic image of She-Hulk, and approves the scientist's plan. "Get us the She-Hulk!"

Back on Earth, Jen and Weezi have finished stitching up the zombies, and the police have taken Black Talon into custody. They return to New York and report to Blake Tower about what happened. Tower asks about the incident that started this all; the murder committed by Joe DeCosta. Weezi explains that Living Diamond had wound up in an unmarked grave, and the Black Talon knew he was buried there, but not in which specific grave. So, he sent one of his zombies, DeCosta, to cast a spell that wound zombify the entire cemetery. After this, DeCosta slipped out of Black Talon's control just long enough to commit the murder.

Jen says the only unresolved point is what she is going to do with Garth now. Jen says that he has shown to have the loyalty of a cocker spaniel...and about the same I.Q. Weezi comments that keeping him around is as good a way as any to keep him out of trouble. They try and go back into Jen's office, but the door is stuck. It turns out that the issue got jostled in shipping, and all the black sheeting that Byrne uses for his shadow-box layouts slipped to the last page. "Ma-a-an!! How come this kind of thing never happens in Namor??"

Retrieved from "https://heykidscomics.fandom.com/wiki/Sensational_She-Hulk_Vol_1_35?oldid=1452358"
Community content is available under CC-BY-SA unless otherwise noted.