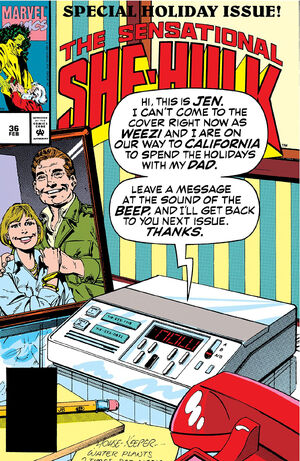 Appearing in "Plastic Snow And Mistletoe"Edit

Synopsis for "Plastic Snow And Mistletoe"Edit

On their way to L.A. to spend Christmas with Jen's father, Jen and Weezi drop in on Wyatt Wingfoot! Wyatt is thrilled to see her, and Jen picks him up and plants a big kiss on him! "C'mere, you great big gorgeous hunk of man!"

Jen asks Wyatt if he'd like to tag along for Christmas dinner. Wyatt says he'd love to, but can't since his duties as tribal chief of the Kewazi are keeping him too busy at the moment. Wyatt explains that the Kewazi land contains the third richest reserves of crude oil in the U.S., and that his grandfather was able to use those resources to turn this desert land into a paradise. However, there are some people in Washington who want to try and revoke the Kewazi treaty, so that they can try and take the oil for themselves. Wyatt decides to change the conversation to a more pleasant topic, and asks Jen how long they can stay. Jen tells him that her father is expecting them tomorrow afternoon, but since it is only a 15 minute flight with her car, they can stay overnight.

In the middle of the night, Jen is sitting outside alone, looking out at the stars. Wyatt comes outside to check on her. She tells him that she is wrestling with her feelings, since she didn't realize how much she missed him until she saw him again. She tells him that she wants him back in her life. Wyatt smiles and says her wish is his command. Jen grabs the half-naked Wyatt and rolls him on top of her. "Now, I think it must be time for a quick sub-plot...'cause what I've got in mind has no place in a Comics Code approved book."

In Olympus, Hermes informs Eros that his mother is summoning him. He goes to her, and she tells him that she has found a suitable challenge for his match-making skills. She tells him to look at the "creature" now materializing on Earth. Eros says he looks like a brutish, mindless boor. Venus says that if he can find a perfect match for him, he'll have proven once and for all that he deserves his reputation as god of love!

The next morning, Jen and Weezi make their goodbyes to Wyatt. Jen gives him once more chance to join them, but he can't. He does say that he has business in New York early in the New Year, and suggests that they pick him up on the way back. Jen happily agrees.

As they fly to L.A., Weezi comments on how nice Wyatt was, and she's surprised that nothing more permanent had happened between Jen and Wyatt. Jen explains that her and Wyatt's love affair got lost in the shuffle in FF once the Johnny and Alicia got started. Suddenly Weezi asks if they've been flying the wrong way. Jen asks why, and then looks out the window and sees why Weezi was confused… there is snow on the ground! However, as they land the car, the slipstream causes the edges of the "snow" to curl back. Jen takes a closer look, and discovers that it isn't snow at all… it is white plastic sheeting. Morris Walters, Jen's dad, explains that he set it up to make her feel more at home, since she has been living on the east coast for the past few years and probably has gotten used to having a white Christmas.

Jen and Morris hug, and Morris asks if Jen is going to introduce her traveling companion. Jen introduces Morris and Weezi, and Morris tells Weezi to call him Moe. He is surprised at how young Weezi looks for her age; Weezi says that Jen must not have told him about her recent rejuvenation. Moe says he'd be happy to hear about it, but first he should introduce her to the rest of the family. Jen is shocked, and wants to know who the rest of the family are. Moe says that it is all her brothers and sisters, and their families. He opens the door and there are dozens of people inside. She-Hulk is outraged and grabs her copy of the Marvel Universe Master Edition, and reminds Byrne that she does NOT have any siblings and orders that this extra family be taken out! She then tells Byrne to cut to Christmas Eve… now!

Christmas Eve, Jen, Weezi and Moe are finishing hanging the decorations on the Christmas tree. Moe is starring at a "baby's first Christmas" decoration. Jen asks if he is okay, since he has been unusually quiet. He says he's fine, and then says that their company has arrived, when he hears a car horn.

Jen wonders who the company could be...and when she opens the door, she finds her old friend Zapper Ridge getting out of the car! She rushes over to see him and greet her old friend. Zapper then introduces his wife, Christina, who is a spitting image of She-Hulk minus the green skin, of course. Jen's friend Richard Rory gets out of the car next, commenting that it isn't hard to figure out Zapper's taste in women. Jen comments on how prosperous Richard looks, and he tells her that he inherited a ton of money from an aunt her never knew he had. Jen is thrilled that they could all come over for Christmas Eve dinner, and she brings them inside to meet Weezi.

They go inside and find Weezi and Moe kissing underneath the mistletoe. The two blush, and try to excuse themselves by blaming it on the mistletoe. Jen just smiles. "Yeah, right. Okay, let's get on with dinner before you two give new meaning to the X in X-Mas!"

They all enjoy a pleasant dinner, and then the guests go home. Later that night, Weezi gets out of bed and heads downstairs for a snack. She can't believe that she is still hungry considering how much she ate at dinner. She is surprised to find Moe is still up, sitting in the living room. He says he is just thinking. Weezi asks if it is about Jen, since she has noticed that something hasn't been right between the two of them since they got there. Moe brings up how he and She-Hulk got off to a bad start, with him even trying to hunt her down, not knowing she was Jen. Weezi remembers that, but thought that he and Jen had smoothed out those rough spots. Moe agrees that they did, and says that he is very proud of her. However, he wonders if maybe it is just the season, but he really misses the old Jennifer. She-Hulk overhears this, and goes back to her room to cry.

Weezi comes in a minute later to talk to her about what her father said. Jen tells her that she already knows. Weezi asks what she plans to do about it, but Jen points out that there is nothing she can do, since she is permanently stuck as She-Hulk now. Weezi reminds her about the present that Nick St. Christopher put in her pocket that is magically in any pocket she reaches into. Weezi remembers how Nick described the present, and says that it sounds like he gave her a Christmas Wish! As Weezi walks out of the room, she asks what harm there would be in trying. She-Hulk pulls out the box and opens the wrapping paper...

Moments later, the human Jennifer Walters comes downstairs to see her father! Jen tells him that this is a one-night only, special Christmas gift. Jen asks her father to help her put out milk and cookies for Santa. Moe raises an eyebrow and asks if she isn't a little too old for that. Jen smiles and says she has an extra special reason to say thanks to old St. Nick this year.

Retrieved from "https://heykidscomics.fandom.com/wiki/Sensational_She-Hulk_Vol_1_36?oldid=1452359"
Community content is available under CC-BY-SA unless otherwise noted.