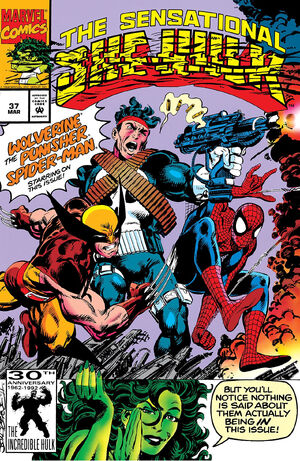 Appearing in "The Big Rub Out"Edit

Synopsis for "The Big Rub Out"Edit

The issue opens with She-Hulk being wiped out of existence by the Living Eraser!

Then we go back a few hours, to Jen and Wyatt flying back to New York in Jen's car. Jen tells Wyatt that Weezi decided to stay in California for a while. Wyatt comments that she and Jen's dad must have really hit if off. Jen just hopes that Byrne doesn't plan to have them get married and start having kids; she figures she is too old to become a sister. Wyatt comments how he is still trying to get used to the idea that they are in a comic book.

Suddenly, a giant balloon appears in front of them! No matter how Jen tries to dodge, it stays in front of them! They crash into it, and it pops and the credits for the issue fall out. Jen figures it is Byrne's feeble attempt to make up for the lack of action last issue.

They arrive at Jen's apartment, and Jen gives Wyatt a quick tour. When Wyatt bumps into Garth, Jen quickly explains where he came from, and that she has decided to keep him around as a housekeeper. She then shows Wyatt to his room. "We don't want the boys at the Comics Code to get the wrong idea about you staying here, and close us down!"

They go to their rooms to get changed, so Jen can take him out for a New York style night on the town. However, once Jen comes back out, in an attractive black dress, there is no sign of Wyatt. She checks his room, and he isn't there either. Suddenly the Living Eraser appears, and starts to "erase" her! "You're kidding! Look, pal, you may have been cooked up by Lee and Kirby, but you're hardly their best work!" She-Hulk tries to attack him, but she is erased before she can reach him. He then uses his power on himself, and reappears in Dimension Z, in the throne room of the Supremacy. Jen realizes that the "eraser" is really a way of teleporting things across dimensions.

The Supremacy tells her that they originally used the device to steal Earth's atomic secrets, but now they have used it to claim his ideal queen. Jen tells him to think again, since she already went through this with Mole Man. She asks what's wrong with the women on his world. He tells her to look out the window and see for herself. She does, and sees that all the women look exactly like her! The Supremacy says that they are all so ordinary, while she is perfection. Jen refuses his proposal and says she is going back to her own dimension. The Supremacy pulls back a curtain and reveals Wyatt Wingfoot chained to a wall. They kidnapped him to ensure that She-Hulk would comply with his demands. She-Hulk grabs the Supremacy, and one of the guards tries to stop her. She punts the guard away with a quick kick, and then frees Wyatt with one hand, while holding onto the Supremacy with the other. She then forces the Supremacy to tell them where the Living Eraser went. At first he refuses to tell, but quickly changes his mind after Jen lifts him off the ground by his nose! She-Hulk and Wyatt find the Eraser, and Jen takes the eraser device away from him. Living Eraser warns her that she is not properly trained in how to use them, but she doesn't think it'll be a problem. "What could possibly go...wrong...?" Suddenly everything goes white!

The next several pages are all blank, until She-Hulk rips through the page and she and Wyatt step through. Jen demands to know what Byrne is thinking, considering that half the fans hated it when he pulled this gag in the ALPHA FLIGHT series.

She then orders him to put them back in her apartment. Once they are back where they belong, Jen and Wyatt head out for their dinner reservation.

Retrieved from "https://heykidscomics.fandom.com/wiki/Sensational_She-Hulk_Vol_1_37?oldid=1452360"
Community content is available under CC-BY-SA unless otherwise noted.