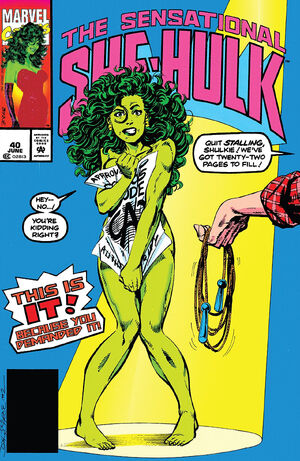 For the first several pages, She-Hulk is skipping rope, apparently naked. Jen complains that a respected superhero and lawyer is being reduced to this due to a simple joke she made in the letters column. Then the editor, Renee Witterstaetter, comes in and tells her to stop it, and snatches the rope away. We see that She-Hulk isn't actually naked, but was wearing skimpy undies that were hidden by the blur lines. Renee tells her that it is time to get the story started, since they are already on page 7. Jen introduces Renee to Wyatt, and they chat while Jen showers and gets dressed.

Jen goes to pick Weezi up at the airport, but is surprised to find that Weezi had put on weight since last they met. As they fly home in Jen's car, Weezi tells her that she has always had a bit of a weight problem. Back when she was the Blonde Phantom, she always got enough exercise to keep the pounds off, but after she retired she stopped watching her figure. And even though the magic liquid she was dipped in changed her body to that of a 40 year old, it didn't erase any of her bad eating habits. Jen diplomatically asks how her father has reacted to Weezi's new look. Weezi says that he has been great about it. "When I told him I was worried because all my clothes were getting tight...he told me to buy new clothes!"

Suddenly Jen loses control of the steering! The car flies straight up into space! Weezi says that she thought Jen's car was only capable of one trip through space, and it already had it! Jen says that's right, but that doesn't seem to be stopping the car from flying into space! Then Jen notices a little red light blinking on the dashboard...and suddenly the car jumps through a space-warp, into the sector she went with Razorback and Taryn. Jen realizes they must be close to the Star Stop Cafe. Weezi passes out, since the limited air in the car is getting stale. She-Hulk's more efficient lungs keep her awake longer, and she drives around searching for the Cafe. Unfortunately, she doesn't know the frequency for the homing signal. She-Hulk passes out. A larger vehicle flies by and pulls Jen's car into its cargo bay.

Weezi wakes up to find a bug-eyed alien with tentacles in her face! She reacts in terror and kicks the alien away! Jen calms her down, saying that they are with friends. It is Al the alien, and U.S. Archer. They are aboard his truck. Al explains that he installed a "recall" system into the car, so that he could bring it back for servicing if there was a problem.

He and U.S. decided to use the recall system to bring She-Hulk there to help them. About a week ago, the Star Stop Cafe started getting hit by meteors. They couldn't figure out how it was happening, since Poppa Wheelie had cleared all the stray rock out of the system before opening the station. Wide Load Annie discovered the source of the problem… there are about a dozen flying mountains that are using their own gravitational pull to direct meteors at the Star Stop! Weezi wonders if the flying mountains are Spragg's Hill People, and Jen suspects that they are. She tells U.S. and Al about her battle with Spragg, and how the Mole Man launched him and the other Hill People into space. She assumes that they fell through some kind of space-warp and ended up here. She-Hulk asks why they need her help, since they already have a superhero in residence...Razorback.

Al starts to tell them about something that happened to Razorback and Taryn, when the emergency alarm goes off! Spragg and his people have resumed their attack on the Star Stop! Jen feels that in a way she is partly responsible for this situation, so she vows to put the situation right, or die trying!

Retrieved from "https://heykidscomics.fandom.com/wiki/Sensational_She-Hulk_Vol_1_40?oldid=1452363"
Community content is available under CC-BY-SA unless otherwise noted.