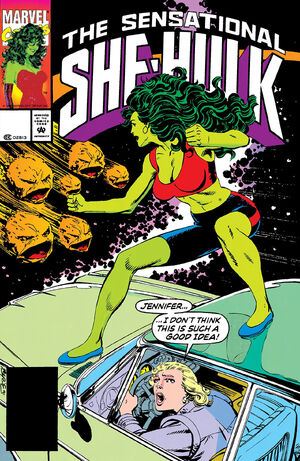 U.S. Archer, Al, She-Hulk and Weezi approach the remains of the Star Stop Cafe, which has been under attack by Spragg!

Jen gives the readers a quick recap on what has led up to the situation, but Weezi stops her, and asks why she is making sexy poses while talking. Jen explains that she is doing it to give the readers something interesting to look at while she is doing all the exposition. This discussion is interrupted when the truck gets hit by a meteor! Spragg is continuing his attack on the Star Stop!

She-Hulk plans to take her flying car out into space in order to confront Spragg personally. Weezi joins her, now dressed in a space suit. She-Hulk wonders if Archer has a space suit in her size. Archer says no, but she won't need one. He gives her an "oxygen pill" from Al, which will temporarily adapt her body to function in outer space. He then gives her a special communication device that will allow her to talk to Weezi despite the vacuum of space.

Soon, Jen and Weezi fly into the meteor swarm, and She-Hulk starts smashing rocks! Jen is being careful not to hurt any of the Hill People until she can find out why they are now fighting on Spragg's side, and figure out which one is Spragg.

Spragg answers that question for her--they are all Spragg! After he and the Hill People were shot into space, the other Hill People chose to go on their way peacefully out into the galaxy. Spragg wound up falling into a wormhole near Jupiter, where he telekinetically pulled along some of the rocky material that composes Jupiter's ring. The wormhole deposited him near the Star Stop. Spragg spread his consciousness among some of the larger stones, and used the small ones as meteors to attack the station!

She-Hulk wants to know why he had to start attacking people again, rather than try to make a fresh start. Spragg declares that as long as there is flesh alive in the universe, he will continue his attacks! Then, while Jen is distracted talking to the "main" Spragg, one of his other bodies rams her from behind! She-Hulk is caught off guard, but then pounds the Spragg into rubble! She-Hulk continues to smash away at the Spragg squad, but then sees that Weezi is under attack! The car is being pummeled to pieces by rock bombardment! Jen races back to the car to protect Weezi! Weezi tells her that the engine and control linkages are all destroyed; they are stranded there, until either Spragg finishes them off, or until their oxygen pills wear off!

We cut to John Byrne and Renee Witterstaetter talking about how the issue came up one page short, and how they have to fill that gap. Coincidentally enough, this scene takes up the page.

Retrieved from "https://heykidscomics.fandom.com/wiki/Sensational_She-Hulk_Vol_1_41?oldid=1452364"
Community content is available under CC-BY-SA unless otherwise noted.