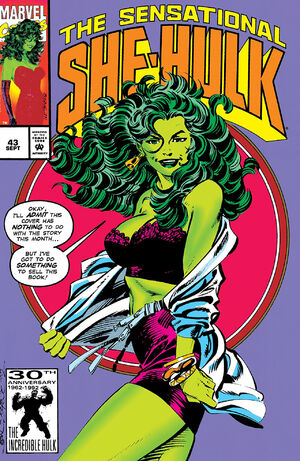 She issue starts with She-Hulk and Xemnu fighting, but the art and writing style are all wrong. After a few pages, Renee steps in and demands to know what is going on. Byrne tells her it is a "fromage"; Renee corrects him, telling him the word is "homage" and that this isn't that either. She tells him to start the issue over, using his own style.

The story resumes where it left off last issue, with She-Hulk confronting Xemnu! Xemnu explains how he escaped from the situation She-Hulk left him in. The psychic damper she had placed on him left him without most of his hypnotic powers, but Enilwen's brain works at such a low energy level, he was able to influence him despite the damper. He eventually managed to convince Enilwen to stop collecting teddy bears, and to "free" them all, including Xemnu. She-Hulk is mad at him for messing with a childlike mind like Enilwen's. "But, anyway, enough playing catch-up. You're free, and you're back. I assume you have some sort of nasty vengeance planned?" Xemnu confirms that he does and then slams a fist into the She-Hulk! Jen is caught completely off-guard, since she was expecting a mental attack, not a physical one! As She-Hulk struggles to get back to her feet, she finds she can barely move. Xemnu explains that while they were talking, he used his mental powers to sap her will! Jen tries to summon up an adrenaline surge to let her break free and fight, but she only ends up falling on her face!

Xemnu summons his ship, and says it is time for her humiliation to begin. He plans to take her to the planet X'Orr, the slave market of the galaxy! There he will sell her to the grossest, most disgusting creature. She will be sapped of her will, and forced to become the creature's plaything. Then Xemnu will return, and use his powers to make the buyer sell her to an even more disgusting creature!

While Xemnu is ranting, there is suddenly a loud "BLONG"! Xemnu says ow, and then falls down, knocked out cold. We find Weezi standing behind him, with a large spanner in her hand! "I don't think so, Xemnu!" Jen is delighted to see Weezi, but thought that she had quit the storyline. Weezi explains that while Jen was dealing with Spragg and Xemnu, she was in negotiations with the powers that be, and worked out a deal. Weezi is still overweight, but she isn't as large as she was before. Weezi says she is fine with being "pleasingly plump", and at least this way she can wear some more fashionable outfits. So, with that situation taken care of, she returned to the story, and knocked Xemnu out with a whack to the back of the head!

Jen and Weezi rejoin Archer, Al, Poppa and Annie to find out what Al was starting to tell her about Razorback, before Spragg had attacked. Al tells her that they last they heard from Taryn and Buford, they were flying the Big Pig through the Coal Sack sector. Taryn reported picking up an odd hyper wave transmission, but then she was cut-off, and they haven't been able to contact her since. Suddenly Retread runs up, saying that he just got a bounce-back transmission from the Big Pig. Weezi wonders what a "bounce-back" means, and Archer explains that it means sending an emergency signal in a tight beam in the opposite direction you want it to go, hoping that it will be reflected back to where you want it received. It is used to either disguise your own location, or the location you're trying to send it to. Annie asks what the message said. Retread said it was rather garbled, but that it sounds like Razorback and Taryn have been captured by the Asparagus People!

Retrieved from "https://heykidscomics.fandom.com/wiki/Sensational_She-Hulk_Vol_1_43?oldid=1452366"
Community content is available under CC-BY-SA unless otherwise noted.