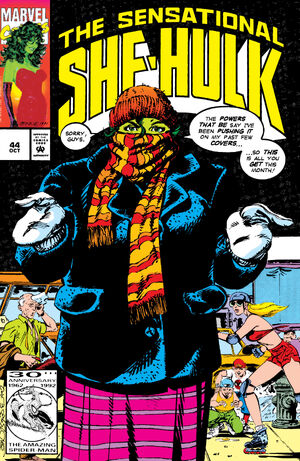 While Archer and Retread drive the truck to the Dendesh system to respond to Taryn's distress call, Weezi asks Jen to explain the situation to her one more time. She-Hulk explains that the "Asparagus People" is a slang term for the D'Bari, and alien race that has apparently captured Razorback and Taryn. The D'Bari were believed to have been wiped out years ago during the Dark Phoenix incident, when she went on a destructive rampage through the Shi'ar galaxy and made the D'Bari sun go supernova.

Jen goes on to explain how Earth's first contact with the D'Bari was in the early days of the Avengers, back when Captain America was first taken out of suspended animation. A D'Bari had crashed landed on Earth centuries ago, and became the basis of the legend of the Medusa, using his ray gun that turns people into stone statues. He used that ray on all the Avengers, except Cap. Cap convinced him to reverse the effects, and the Avengers helped the D'Bari free his long-trapped spaceship so he could finally go home. That had been the last anyone had heard of the D'Bari until the Dark Phoenix destroyed them.

Archer tells them that they are approaching their destination when suddenly he detects a ship following them, trying to catch them for a speed trap! Archer engages in evasive maneuvers. Jen wonders if that is a good idea. She points out that if these guys are the local authorities, they might need their help later. Archer says he'll take that chance, because he has never been pulled over in his career, and he doesn't intend to break that record. Archer checks his rear sensors and cheers that they've left the cop behind, but Jen points out that there is a reason he gave up the chase...an alien fleet has surrounded the truck!

Shortly, Jen, Weezi, Archer and Retread have been brought aboard the Skrull flagship, and strip-searched. They have been brought to the captain in their underwear. The Skrull Captain is annoyed to find humans this far out in space. However, he admires She-Hulk. He says that if her chin wasn't so smooth and her eyes weren't so white, she would make a very attractive Skrull! She-Hulk shoves the Captain away, "Now there's the kind of compliment that keeps you up at nights!" She asks the Captain what the Skrulls are doing here. He won't answer, but wants to know why she is there. She tells him that they are on a rescue mission to Dandesh. The mention of Dandesh grabs the Captain's attention, and he decides to accept Jen's story for now. They soon arrive in the Dandesh system, and find the Big Pig in a captive orbit around Dandesh Four. The Skrull Captain asks why there would be a human vessel here. She-Hulk explains that Razorback and Taryn were doing deep space exploration for N.A.S.A, but were captured by D'Bari survivors. The Captain says that is most unfortunate for her friends since he is here on a mission to destroy this planet! Jen groans that the D'Bar just can't catch a break. Before they get into a debate over whether She-Hulk will allow the Skrulls to wipe out a whole planet, she convinces him to let her go down and try to rescue Razorback and Taryn.

As the Skrulls teleport her down, the Captain asks how she expects to find two humans among three hundred thousand aliens. Jen says that's simple; she's going to let the D'Bari capture her too, hoping they'll take her wherever they took the others.

She-Hulk materializes on the planet, and runs away for a bit, so that the D'Bari don't think get suspicious, before she lets them capture her. They take her to a prison, and put her in the same cell with Razorback and Taryn! She asks them if they're okay, and they say they are, but that Jen shouldn't have come since there is no escape. She-Hulk isn't ready to give up, and she charges the cell bars! However, she gets repelled by an energy field protecting the bars. Taryn tells her there is no way to break out. "It's just a matter of time before we all end up...like him!!" She-Hulk looks into the next cell and sees Rocket Raccoon, turned into a stone statue!!

Retrieved from "https://heykidscomics.fandom.com/wiki/Sensational_She-Hulk_Vol_1_44?oldid=1452367"
Community content is available under CC-BY-SA unless otherwise noted.