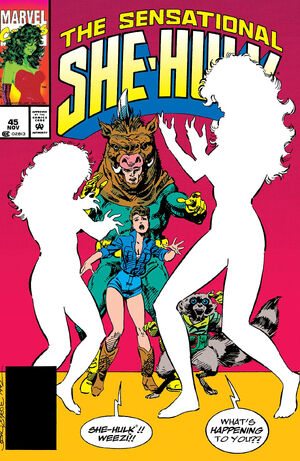 Appearing in "Change of Mine..."Edit

Synopsis for "Change of Mine..."Edit

She-Hulk is shocked to see Rocket Raccoon in the next cell, turned into a stone statue! She asks Taryn what happened. Taryn explains how she and Buford picked up a strange subspace signal in the Coal Sack Nebula, and went to investigate. They followed the signal to Dandesh Four, where they found Rocket Raccoon fighting against a planetful of D'Bari! Rocket was doing fine until the arrival of Taryn and Razorback distracted him. Then he got hit by the D'Bari weapon and was petrified into stone. Razorback and Taryn fought their way through the crowd to try and rescue Rocket, but then a cage was dropped on them! Then they were taken to the prison, where they have been left ever since. Razorback starts to tell She-Hulk that "these guys aren't really...ah-k!"...the D'Bari turn him into a statue! Taryn goes hysterical, screaming and demanding to know why they did this to him now, when they could have done it any time! Jen tries to calm her down. The D'Bari tells her that he doesn't need to explain himself to a member of the species that destroyed his race. She-Hulk realizes that this D'Bari is the same one whom the Avengers encountered on Earth years ago. She-Hulk says that since the Avengers helped him, he should realize that not all humans are bad, and he shouldn't blame the entire race for the actions of one "bad egg". The D'Bari is insulted that Jen would refer to the killer of his race in such a manner. He is tempted to turn her to stone, but decides to wait until he learns why she came. He leaves, and tells her that she had better be prepared to tell him everything when he returns in one quarling. Jen wonders how long a quarling is, and a voice from the next cell tells her that it is about 15 Earth minutes. Jen turns and sees that there is an Ovoid in the next cell. She remembers hearing about the Ovoids from the Fantastic Four. They were a highly advanced alien race, with the mental ability to transfer their minds into other bodies. The Ovoid explains that although most species can learn the mind-transfer technique, most don't know how. He came here on a trading mission to teach the aliens how to do it. Jen asks how he wound up in prison. He doesn't know; the D'Bari seemed interested in mind-exchange process, until one of them wondered if it was similar to telepathy. As soon as they considered the idea that the Ovoid could read minds, they locked him up.

Taryn is annoyed that Jen is having a conversation while Buford has just been killed. Jen assures her that Buford isn't dead. If they can get their hands on the D'Bari weapon, they can reverse his transformation. Taryn wonders how they are going to get their hands on the weapon, since they are trapped in the cell with no way to communicate with the outside. Jen has an idea, and asks the Ovoid what the range for the mind-transfer is. He says it has never been measured, but that the range should be unlimited. Jen asks him to teach the technique to her, so she can send her mind to one of the starships up above. The Ovoid points out the transfer only works with members of the same species. Jen says that isn't a problem.

Aboard the Skrull ship, Weezi, Archer and Retread are in a holding cell, still in their underwear. Weezi is worried about She-Hulk, since she went down there all by herself, but Archer tries to convince her that Jen will be fine. The Skrull Captain barges in and demands to know why She-Hulk hasn't contacted them yet. He agreed to delay the destruction of this planet long enough for her to find her "friends". When the Skrull has trouble remembering the word "friend", Retread makes fun of him. The Skrull grabs Retread by the throat, lifting him into the air, and telling him he should remember which one of them is in control of the situation. Weezi tries to calm the situation, and tells Retread to apologize. He does, and the Skrull drops him. The Captain asks again why She-Hulk hasn't contacted them. Weezi starts to respond to the question, but then gets dizzy. Archer and Retread try to help her to the bench to sit and rest, but Weezi's body goes through a startling transformation! Moments later, Weezi's body has become as big and powerful as She-Hulk's, and Jen has become short and plump like Weezi!

Retrieved from "https://heykidscomics.fandom.com/wiki/Sensational_She-Hulk_Vol_1_45?oldid=1452368"
Community content is available under CC-BY-SA unless otherwise noted.