Start a Wiki
Part of the 'Flashback (Event)' event 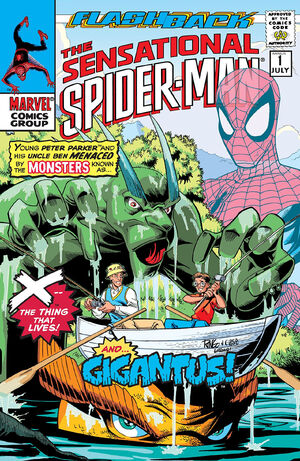 Oh, monsters, is it? It's because of those horrible funny books! Take them out of here, Ben! Put them in the garbage!

Appearing in "Here There Be Monsters!"Edit

Synopsis for "Here There Be Monsters!"Edit

Part of Marvel's flashback month. In this issue, a young Peter Parker goes fishing with his Uncle Ben, and they are attacked by monsters. The drama ends when Peter awakes, and realizes the whole thing was just a nightmare. Naturally, Aunt May assumes that Peter's comic books are to blame. Later, as Peter has just begun to fall asleep again the supervillain Nightmare appears and decides to feast on the young boy's dreams... and Stan Lee knocks him out with a tennis racket to the head.

Retrieved from "https://heykidscomics.fandom.com/wiki/Sensational_Spider-Man_Vol_1_-1?oldid=1452386"
Community content is available under CC-BY-SA unless otherwise noted.