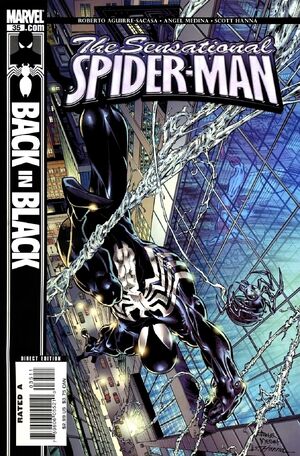 It is three o'clock in the morning. Someone is trying to open a locked door, and it looks very similar to a house invasion. From the darkness comes a figure, greeting the frightened man with comedy, and seriousness. It is Spider-man, all dressed in his red-and-blue outfit. Spider-man kicks down the man, and starts to give the man excuses for why he would be here so early in the morning trying so hard to open up a locked door. The man gives Spider-man another excuse: "I'm really a Cop and this is a setup, Spider-Punk." Immediately, lights turn on and Police surround Spider-man. Spider-man surrenders, but is trying to tell the Police something. The Police don't listen, and pull his mask off. It's not Peter Parker who appears under the mask, as the fraud was trying to tell them, his name is Ethan Myers. The news comes out everywhere. Myers is being interrogated, and tells the Police that someone gave him his powers, but he doesn't know who. It was a man, and that man gave him Spider powers, and a Spider-man suit. Myers was knocked unconscious, awaken later on a rooftop. Myers decided to act like Spider-man for the night, when he was surrounded by the Police. Later, the following night, Spider-man, the real Spider-man, is heading towards the prison to talk to Myers. When Spider-man gets to the cell holding Myers, he sees a man in immense pain. Spider-man breaks into the cell, and shoots webs at Myers blanket, pulls it off, and sees horror... Myers has mutated into a monstrous freak from the middle, with noticeable small, extra arms sticking out. Spider-man doesn't know how to help Myers, so he tries to take Myers. Some cops come over to the cell, and Spider-man swings off, telling the cops to call the hospital and Reed Richards. At the hospital, the cops are waiting for Spider-man to show up. Reed Richards is on a rooftop waiting, and Spider-man comes, handing Richards the deformed body. Spider-man then goes to Curt Connors with Myers' blanket, searching for a possible cause in what mutated Myers. Leaving Connors with the blanket, Spider-man sets off. Meanwhile, another Spider-man is swinging a rope in New York city. Unfortunately, the fraud swings in the air and lets go of the rope too soon, and can't make contact to a nearby building because it was far. Unmasked, a dead Chinese man in the Spider-man suit is revealed. On the Lower East Side of New York, a man in a car pulls up to a young man named Jordon Harrison, who is with his girlfriend. The man tells him he can help Jordon. Jordon says the man is crazy and won't go with him. The tells Jordon that he already killed Jordon's mother, and will kill Jordon's girlfriend if he doesn't come with him. Jordon says the man is lying. The man reveals himself as Calvin Zabo, or Dr. Hyde, stating: "No, it's Hyde that lies; Zabo tells the truth. You have five seconds to comply. Tick-Tock, Tick-Tock, Tick-Tock--". To be continued.

Retrieved from "https://heykidscomics.fandom.com/wiki/Sensational_Spider-Man_Vol_2_35?oldid=1721762"
Community content is available under CC-BY-SA unless otherwise noted.