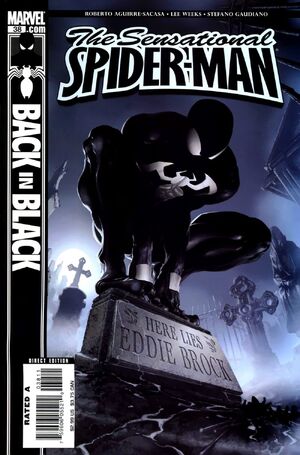 Fingers trembling, I unwrap the package. Legs almost buckling beneath me, I slip the costume on. It's cheap nylon. It hangs loosely on my body. It's nothing like the symbiote. But it's everything... the only thing... I need now.

Appearing in "The Last Temptation of Eddie Brock: Part 1 of 2"Edit

Synopsis for "The Last Temptation of Eddie Brock: Part 1 of 2"Edit

Eddie Brock, dying from cancer and withering away in a hospital, experiences hallucinations of his dark side, which take the form of Venom. While wandering around the hospital he stumbles upon Mary Jane in Aunt May’s room. With his arch-enemy’s family right in front of him he wonders what this could mean.

In the streets, Spider-Man finds three thugs attacking a woman. He makes quick work of them but doesn’t ask if the woman is all right so she makes a point in telling him. He asks her and leaves before she can ask if he’s all right.

Spider-Man arrives at Madame Web's apartment. There, he informs her of everything that’s been going on and asks if they can perform a séance so that they can tell Aunt May that they’re waiting for her to wake up. She tells him that it is possible depending on where Aunt May is and whether or not she wants to be reached and agrees to help.

Eddie prays on what to do at the foot of his hospital bed. His dark side tells him that, despite always trying to protect the innocent, no one is truly innocent and that a person’s innocence isn’t for him to decide. He should seize this opportunity and let someone else sort the good from the bad.

On Eddie’s bed is a package that contains a replica of Spider-Man’s black suit, which he ordered from a store. He opens the package and puts it on.

Retrieved from "https://heykidscomics.fandom.com/wiki/Sensational_Spider-Man_Vol_2_38?oldid=1520368"
Community content is available under CC-BY-SA unless otherwise noted.