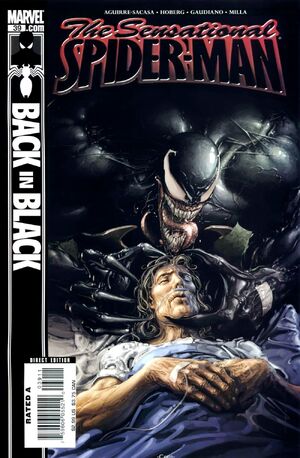 Appearing in "The Last Temptation of Eddie Brock: Conclusion"Edit

Synopsis for "The Last Temptation of Eddie Brock: Conclusion"Edit

On the roof of the hospital, Eddie's dark side tells him to kill Nurse Sims, his nurse, in preparation for later. When Nurse Sims enters his room to give him his medication, he comes up from behind her and stabs her to death with a scalpel. Afterwards, his dark side appears before him and convinces him that she deserved it, but Eddie believes that May Parker is innocent, though his dark side thinks that she deserves to die as well for raising Peter, the man he believes ruined his life.

Somewhere else in the hospital, Peter, Madame Web, Mary Jane, and Anna Watson preform the séance in the hospital lounge while Felicia Hardy keeps watch for them. Part of the séance is to focus on a personal memory of May. Peter goes back to the night Uncle Ben was shot. He finds Aunt May, who tells him that she doesn't want to come back, but Peter won't accept that she's giving up.

Meanwhile, Eddie enters Aunt May's hospital room and puts on his mask. At the same time, a tentacled monster pulls Aunt May into the house as she says her goodbyes to Peter. He runs after her but the door shuts behind her and he can't get it open.

In Aunt May's hospital room, Eddie struggles to decide whether or not to kill Aunt May. With the séance over, Peter tells Madame Web that something else was with them, but suddenly feels his spider-sense tingling. He races to Aunt May's hospital room to find her unharmed and Eddie standing beside her room's shattered window. Eddie admits to him that his dark side, Venom, wanted him to kill Aunt May, but she was too innocent and good for him to go through with it. Then, he shows him the self-inflicted cuts on his arm that he made to surpress his dark side, and after asking Peter for forgiveness, he jumps out the window. But before he falls to his death, Peter catches him with his web.

Eddie awakens chained to his hospital bed where he finds he is still haunted by his dark side. Nevertheless, Eddie asserts his dominance.

Retrieved from "https://heykidscomics.fandom.com/wiki/Sensational_Spider-Man_Vol_2_39?oldid=1725186"
Community content is available under CC-BY-SA unless otherwise noted.