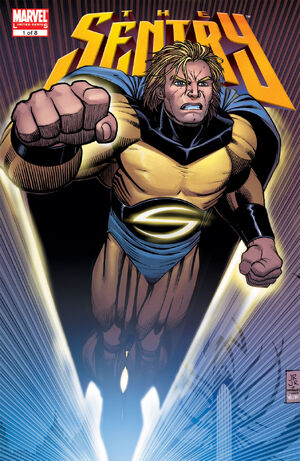 Appearing in "Under the Eye of the Clock"Edit

Synopsis for "Under the Eye of the Clock"Edit

Aliens are attacking earth and only one man can stop them...its Sentry, the man with the power of a million exploding suns! But our hero getting some time to himself to rest, no all day and all night Sentry never stops only for five minutes to see his psychiatrist and even then he can't stop talking about his work.

In this issue, Attuma supposedly dies and is revealed to be alive in Dark Reign: Made Men.

Retrieved from "https://heykidscomics.fandom.com/wiki/Sentry_Vol_2_1?oldid=1665090"
Community content is available under CC-BY-SA unless otherwise noted.