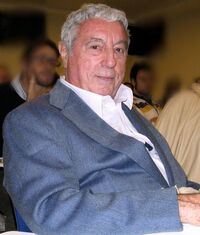 Son of Gian Luigi Bonelli (creator of Tex and founder of the publishing house Audace) and Tea Bonelli (who, in 1946 became head of the company), he entered the world of comics and publishing at a young age. He took on many roles in the family company: everything from bellhop to warehouseman, as well as answering readers' letters.

He debuted in comics in 1954, with the pseudonym of Annalisa Macchi, writing a booklet drawn by Roy D'Amy, featuring the Indian named Ciuffetto Rosso (Red Lock of Hair).

In 1957 he takes charge of the Araldo publishing house, that will one day become Sergio Bonelli Editore, one of the most important comic publishers in Italy (in terms of copies sold), replacing his mother Tea.

Retrieved from "https://heykidscomics.fandom.com/wiki/Sergio_Bonelli?oldid=310663"
Community content is available under CC-BY-SA unless otherwise noted.