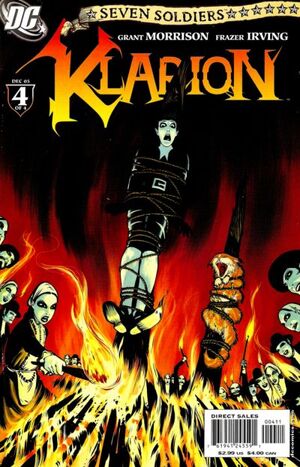 Wuh-wuh-would ye be submissionary? Would ye bear burdens of knowledge heavier than the rock of mountains?

Klarion returns home to try and warn the Croatoans of Melmoth's invasion, but instead is nearly burned for heresy as his neighbors refuse to believe his stories about the world above. When Melmoth's forces break through, Klarion must take drastic action to stop them.

Retrieved from "https://heykidscomics.fandom.com/wiki/Seven_Soldiers:_Klarion_Vol_1_4?oldid=1457194"
Community content is available under CC-BY-SA unless otherwise noted.