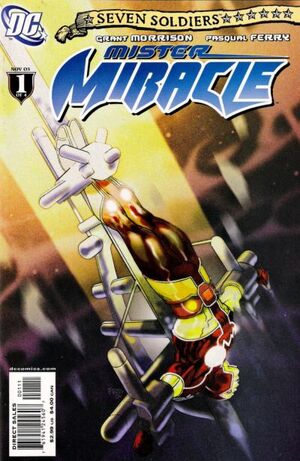 What if I lived in a world where evil came out tops?

In the black hole's event horizon, Mister Miracle is held by Metron, who tells him about New Genesis and the War of the Fourth World. Telling him that "we will meet again where the roads cross", he ejects Mister Miracle from the black hole and vanishes. Outside, Mister Miracle appears to the crowd to have cheated death, but their thoughts have already moved on - how will next stuff be even greater?

This is the root of Mister miracle's current depression - not yet twenty, he feels as if he has done everything he can. His manager Oberon tries to convince him to visit a dark establishment that was recommended to him.

Some time later, Shilo is describing the incident to his therapist, Doctor Dezard. Shilo sensed that the women Oberon was taking him to - Benadeth, Lashina, & Mad Harriet - had a power similar to Metron's, but the impression they gave was purely evil. In a burst of fear, Shilo ran out of the building. Dezard categorizes the outburst as evidence of a mental anguish, and worries that Shilo will soon suffer from brain damage.

As Shilo walks home, he worries about his mental health. At a crossroads, he is accosted by an elderly white poor man in a wheelchair. Shilo initiailly mistakes him for Metron, but he identifies himself as the Black Racer - Death Himself. He issues Shilo a challenge - to truly defy death, by escaping from the Drive-By Derby of Armaghetto!

Retrieved from "https://heykidscomics.fandom.com/wiki/Seven_Soldiers:_Mister_Miracle_Vol_1_1?oldid=1457199"
Community content is available under CC-BY-SA unless otherwise noted.