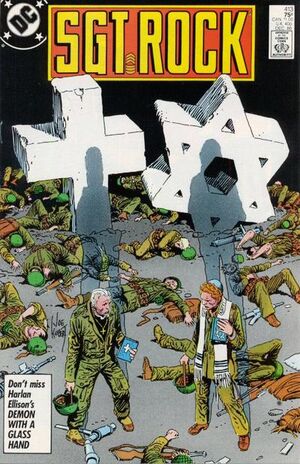 No one fails who gave his best. You grew tall on this hill.

Appearing in "I Owe You One"Edit

Synopsis for "I Owe You One"Edit

Lt. Philip Sinclair is assigned to lead Easy Company on a mission through Sicily. He brings with him a young rabbi Private named Harry Cohen. Sinclair berates Cohen for preferring to wear a yarmulke instead of his helmet. Cohen, uneasy with Sinclair's leadership, befriends Father Kelly – the Chaplain of Easy Company. Sgt. Rock is likewise uneasy with Lt. Sinclair's leadership abilities, but gives the new soldier a wide berth.

Before long, a Nazi tank appears on the horizon. They begin firing shells at Easy Company, who subsequently scatter into the underbrush. The soldiers make for an old bridge and Rock decides to take point. They discover an enemy jeep bearing down on their position from the other side of the bridge. Rock strafes the jeep, causing it to veer to the side, toppling off of the bridge.

Easy Company advances across the bridge and marches towards the Temple of Jupiter. The Nazis have taken control of the temple and set up a garrison around the temple pillars. Easy fights a literal uphill battle, but the worst of the fighting takes place inside the temple itself. They engage in close quarter combat, but the site is alive with gunfire. One enemy soldier gets the drop on Private Cohen, but Father Kelly heroically steps between them, sacrificing himself for the young rabbinical student. Nazi bullets manage to strike Cohen regardless, but the wounds are superficial and he survives. The rest of Easy Company succeed in routing out the Nazis and securing the temple.

Appearing in "A Job for Super-Soldier"Edit

Synopsis for "A Job for Super-Soldier"Edit

At a G.I. camp on the Pacific island of Kwajalein, a young soldier named Homer lazes away by reading the latest issue of Action Comics. His friends chastise him for this behavior and tell him that he could never be as strong as Superman.

That night, the G.I.s discover a small enemy encampment on the other side of a ravine. Private Homer uses a flexible tree as a catapault and flings himself across the ravine. As he arcs downward out of the air, he drops grenade on the enemy soldiers and clears the entire valley. Reunited with his company, Homer's friends raise him on their shoulders and declare him a "Super-Soldier".

Appearing in "Glorious to the Grave"Edit

Synopsis for "Glorious to the Grave"Edit

May 1940, Northern France
Nazi soldiers ambush a British patrol at Dunkirk. While most of the men fight valiantly, one of the British soldiers is captured. He awakens in a hospice and the doctor tells him that he is safely back in London. He asks him about the rest of his unit and where they were last seen. The soldier, bleary-eyed, reveals their location.

It is soon revealed that the doctor is actually a Nazi colonel, and they are still outside of Dunkirk. He radios his commanding officer and tells him that he has just learned the location of the enemy camp. General Kruger arrives to inspect the wounded officer. The soldier tells him that he knew they were Nazis all along. When asked why he would willingly give up his men’s location, the solider tells him that his unit is dying because of an incurable, highly infectious form of influenza, and now the entire Nazi camp has it as well.

Retrieved from "https://heykidscomics.fandom.com/wiki/Sgt._Rock_Vol_1_413?oldid=1457325"
Community content is available under CC-BY-SA unless otherwise noted.